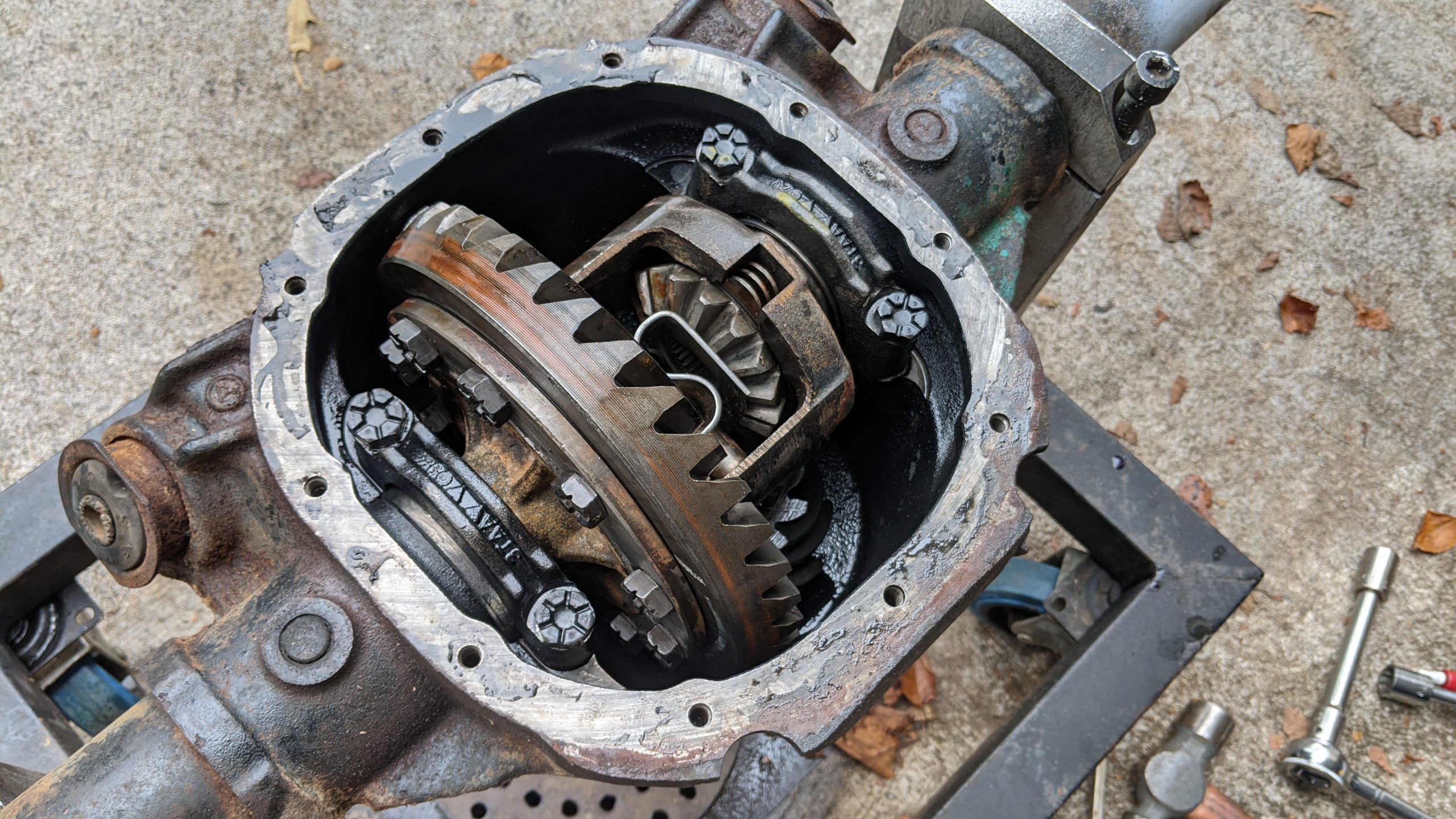 Read more on this axle in the first two posts.

In this hobby there are always things that seem to fight you.  The best laid plans always seem to be stopped in their tracks due to unforeseen circumstances.  This axle seems to be one of those circumstances. 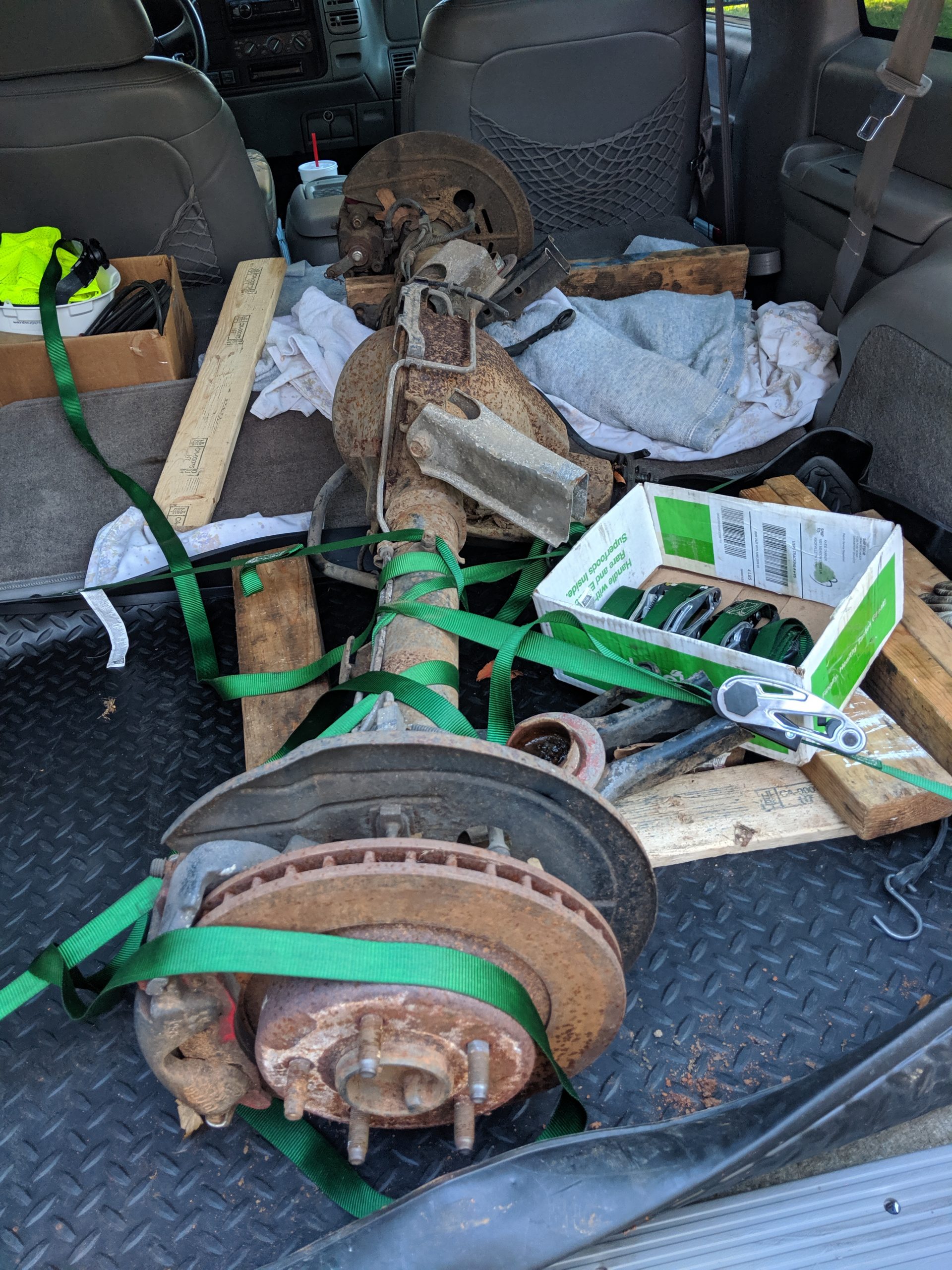 As you can see above this thing was crusty when we bought it.  Our relationship so far since then has been a love hate relationship.

So we were able to get the axle cleaned up and mostly disassembled.  However, we had one lower control arm bolt that was just seized up in the metal sleeve in the rubber bushing.  It did not budge.  Even with an air wrench it wasn’t coming apart.  The sleeve and the bolt had become married as one. You can see in the pic below where we disassembled everything yet that one control arm part was still on the axle. 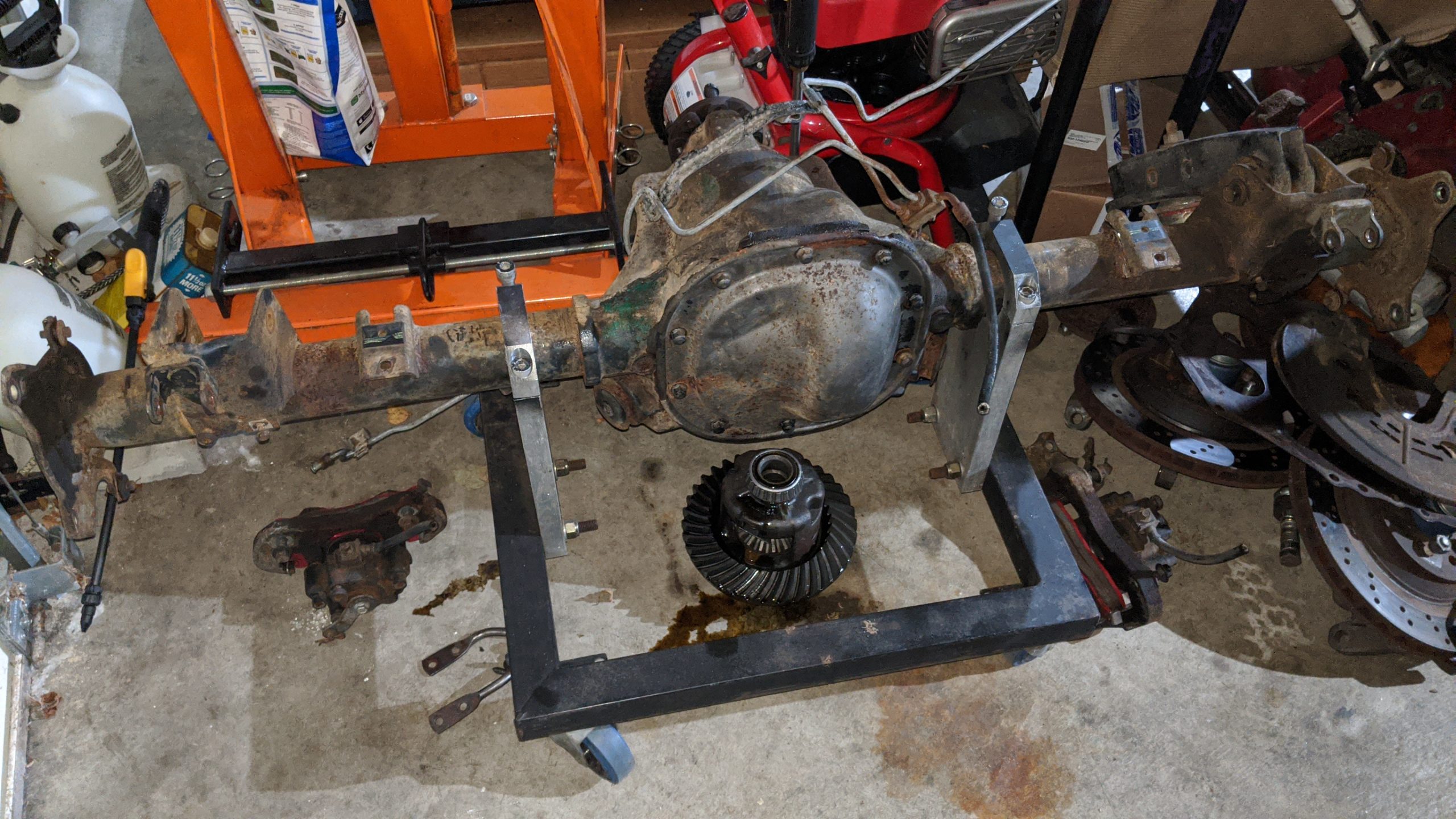 Once we were able to get that apart we thought we were off to the races.  Boy were we mistaken.

We set up the axle outside and actually had about an hour planned in our day to slice off the sway-bar mounts. That didn’t go as planned because the cutoff wheel snapped. Of course it was the last one in our tool chest.  There wasn’t enough time to make a run to go get more so the axle then had to wait another day.  We only made it so far. Didn’t even get a full cut through on the bracket. 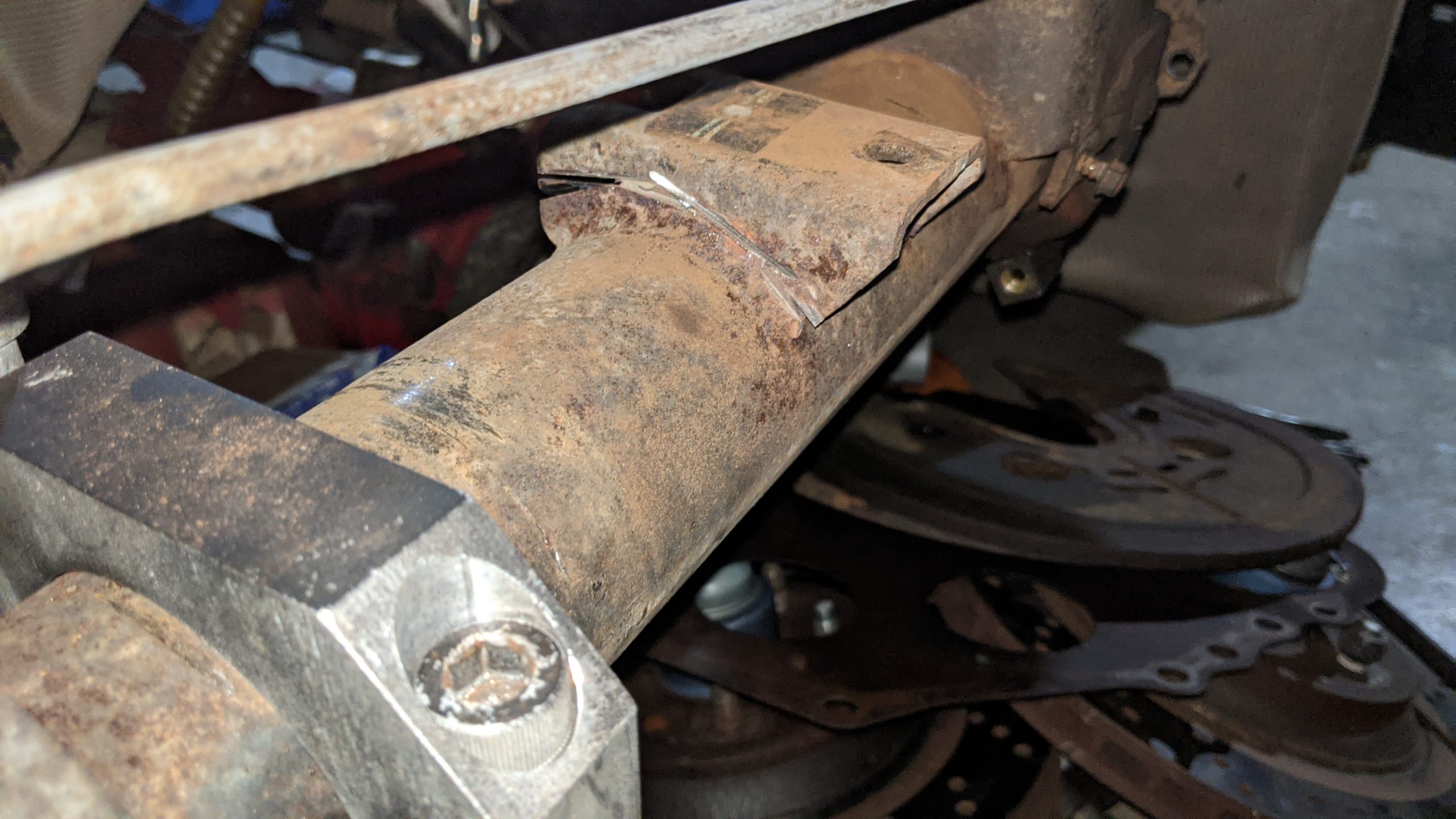 Once we got the right cutoff wheels we still had to break it up into two days just due to our schedule.  However, over the course of two 30 minute events we were able to get the sway-bar mounts removed.  The amount of time it was supposed to take the first time.  Of course. LOL! 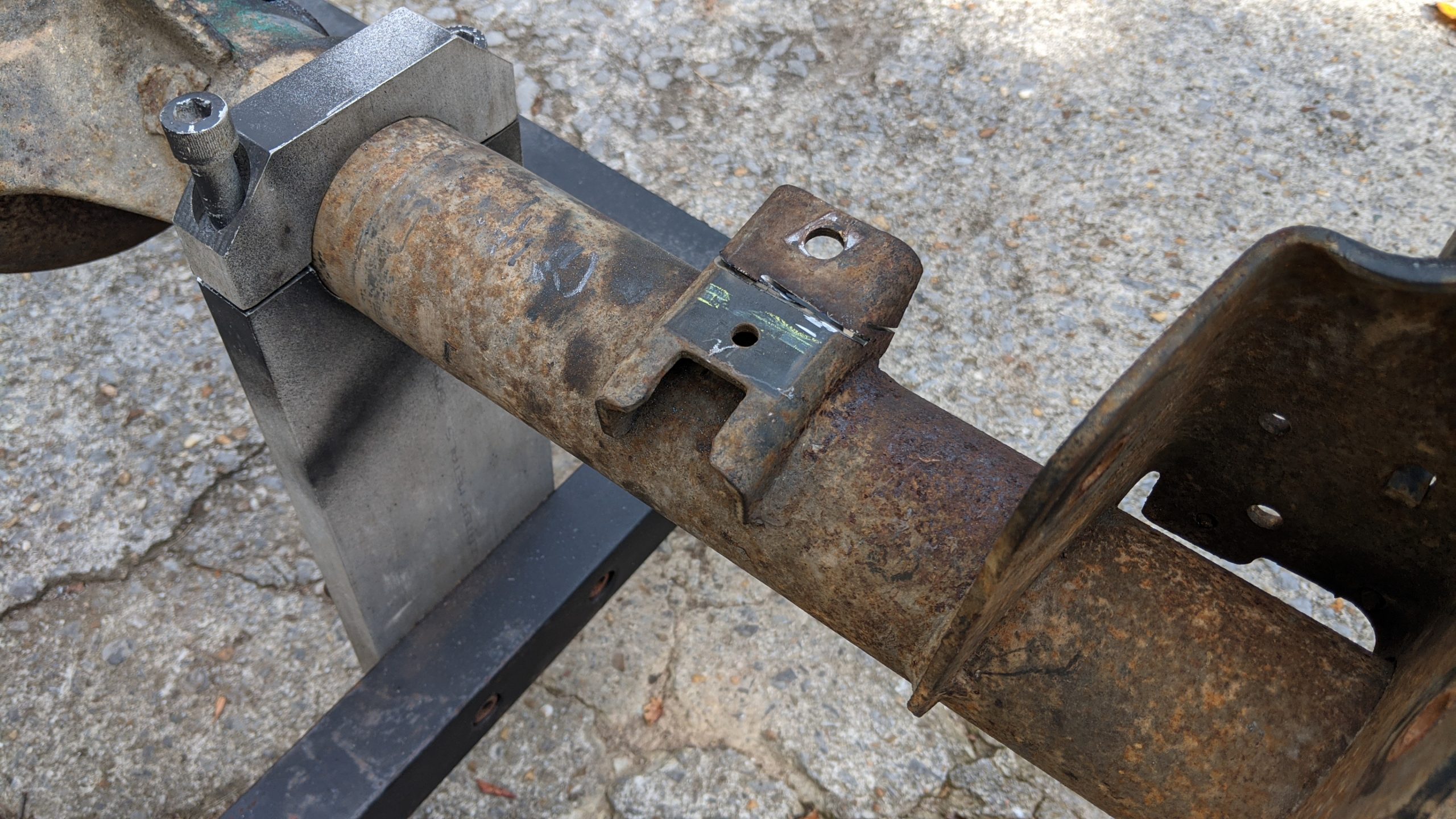 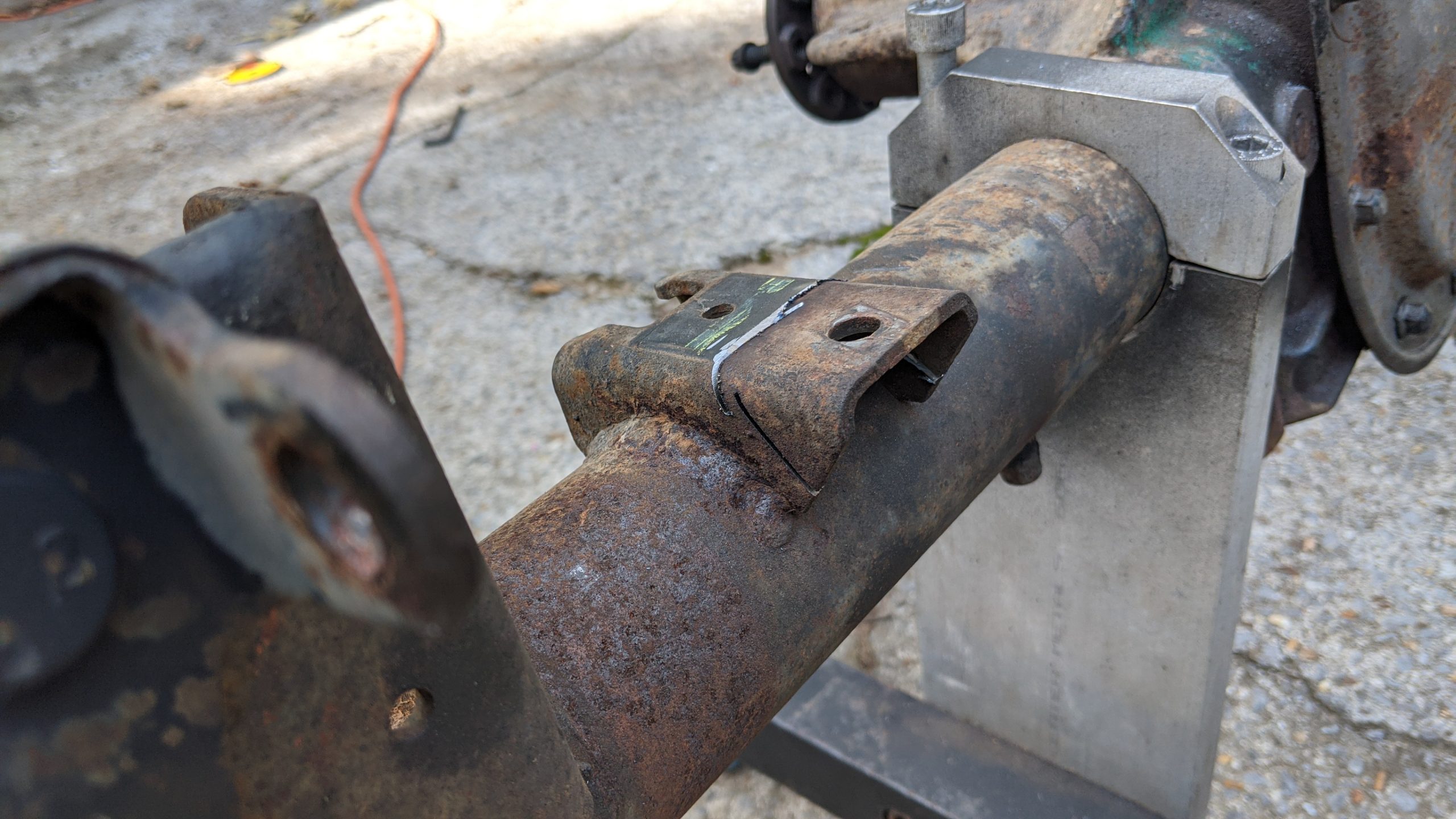 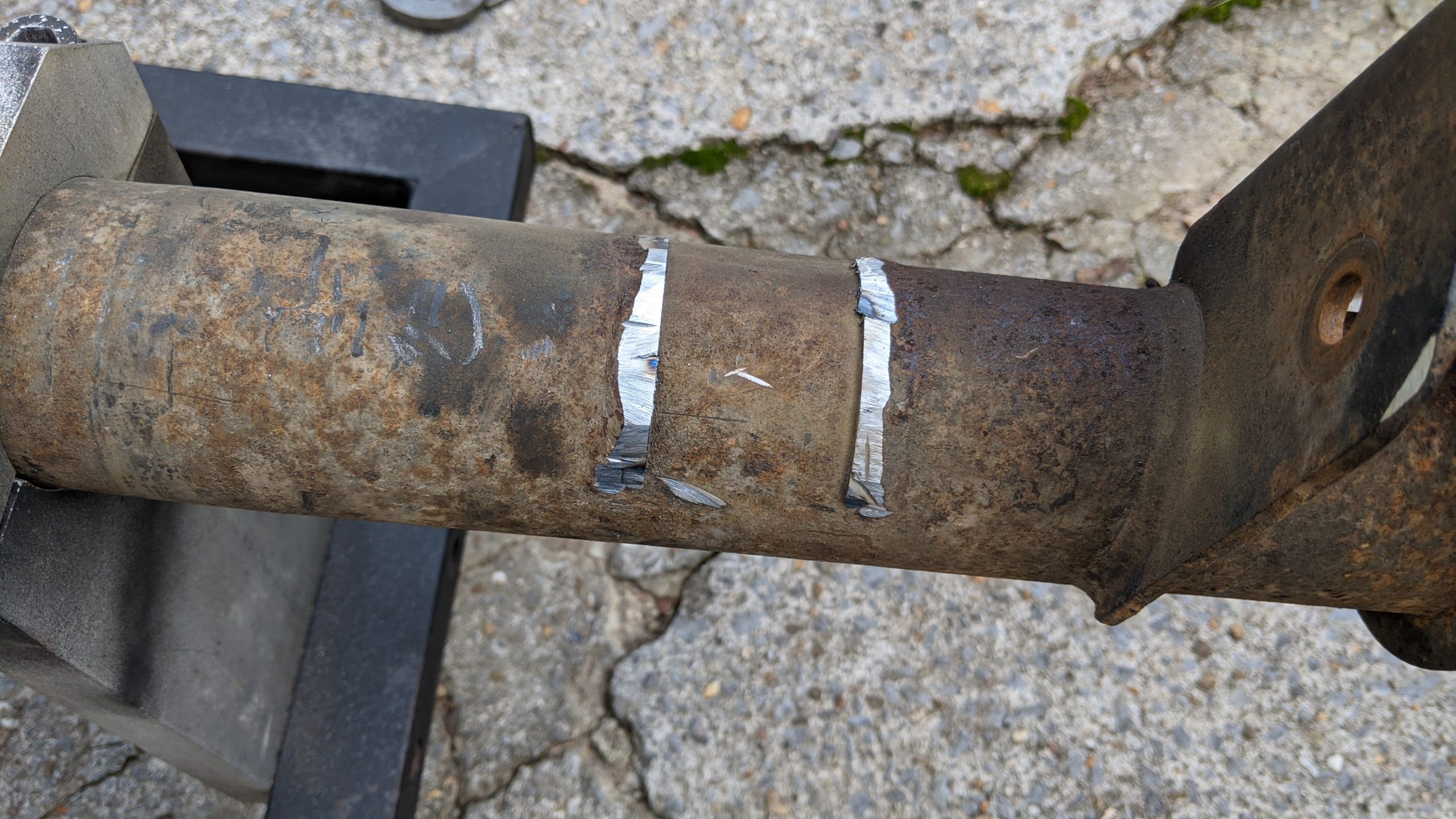 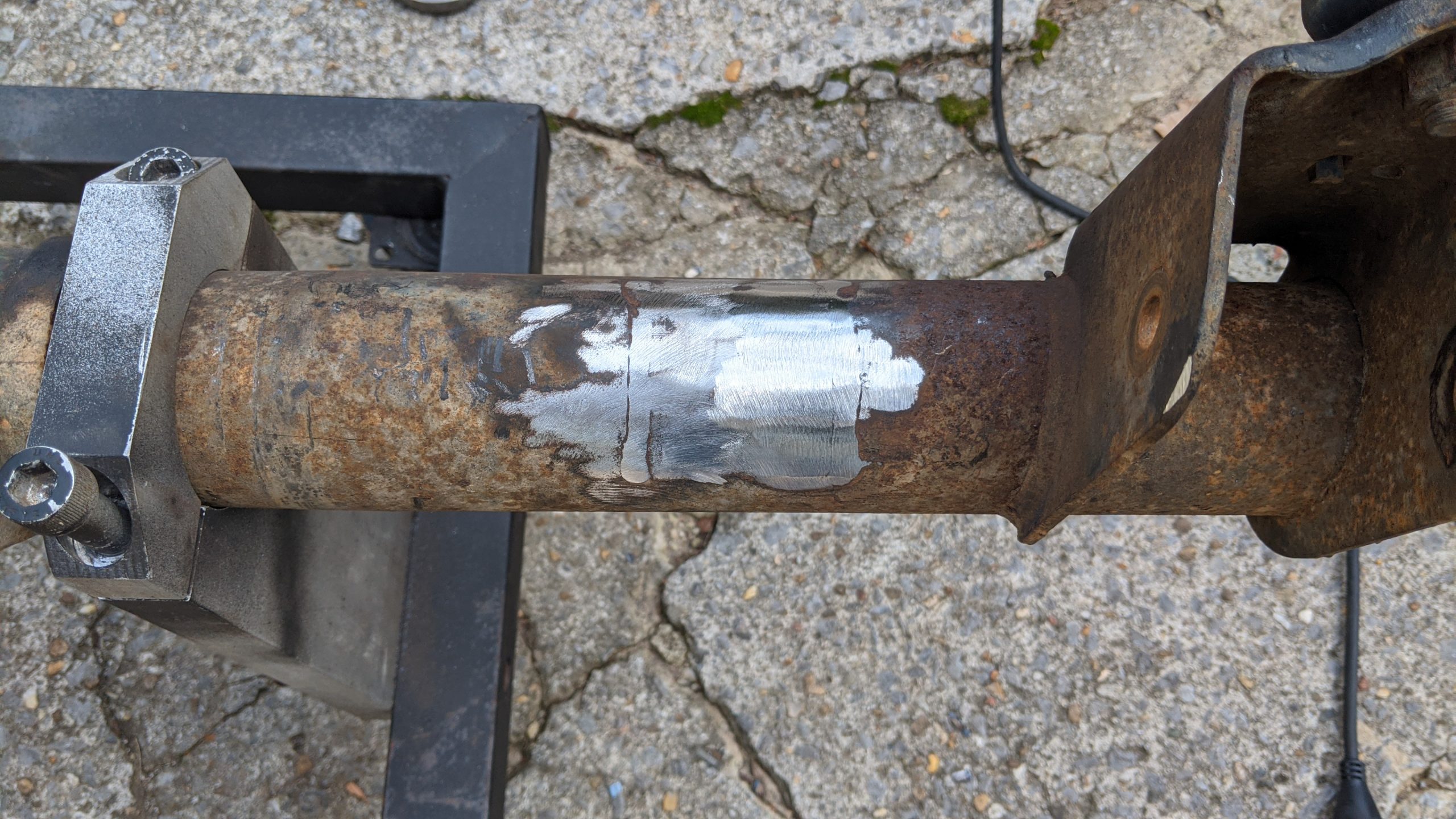 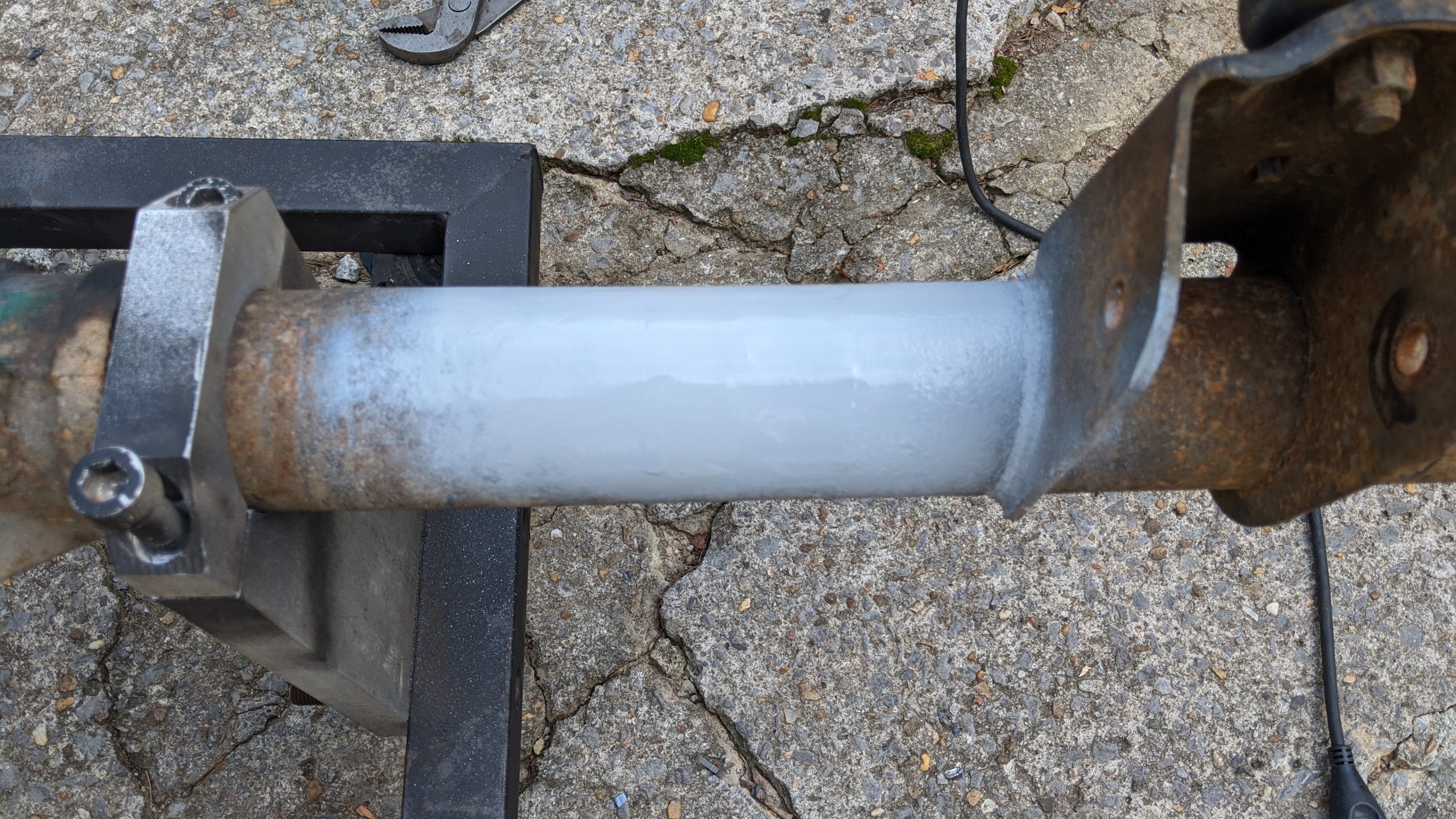 With those finally off of the axle we could turn our attention to the carrier.  We have to swap out to the traction loc unit. Luckily we have one that is in good condition and was removed from one of our previous projects.

Isn’t it just the greatest feeling to pull spare parts off of the shelf and use them??! It is isn’t it?!

So we had to get the ring gear attached to the new traction loc unit. Lady luck was on our side with this because the ring gear fit nice and snug on the carrier.  Just like it is supposed to.  With our torque wrench handy we were able to get that thing all buttoned up and ready to go into the axle housing. 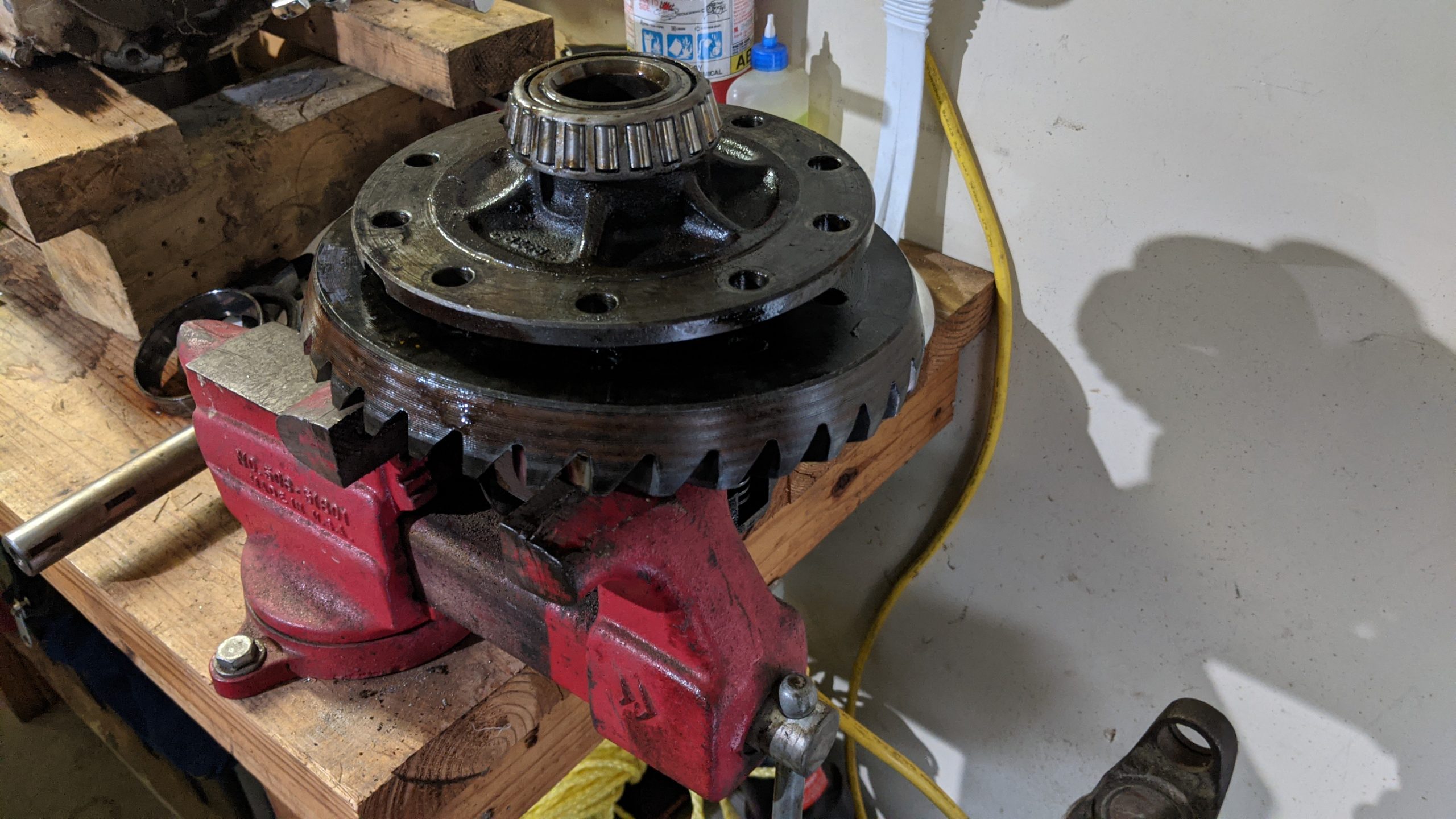 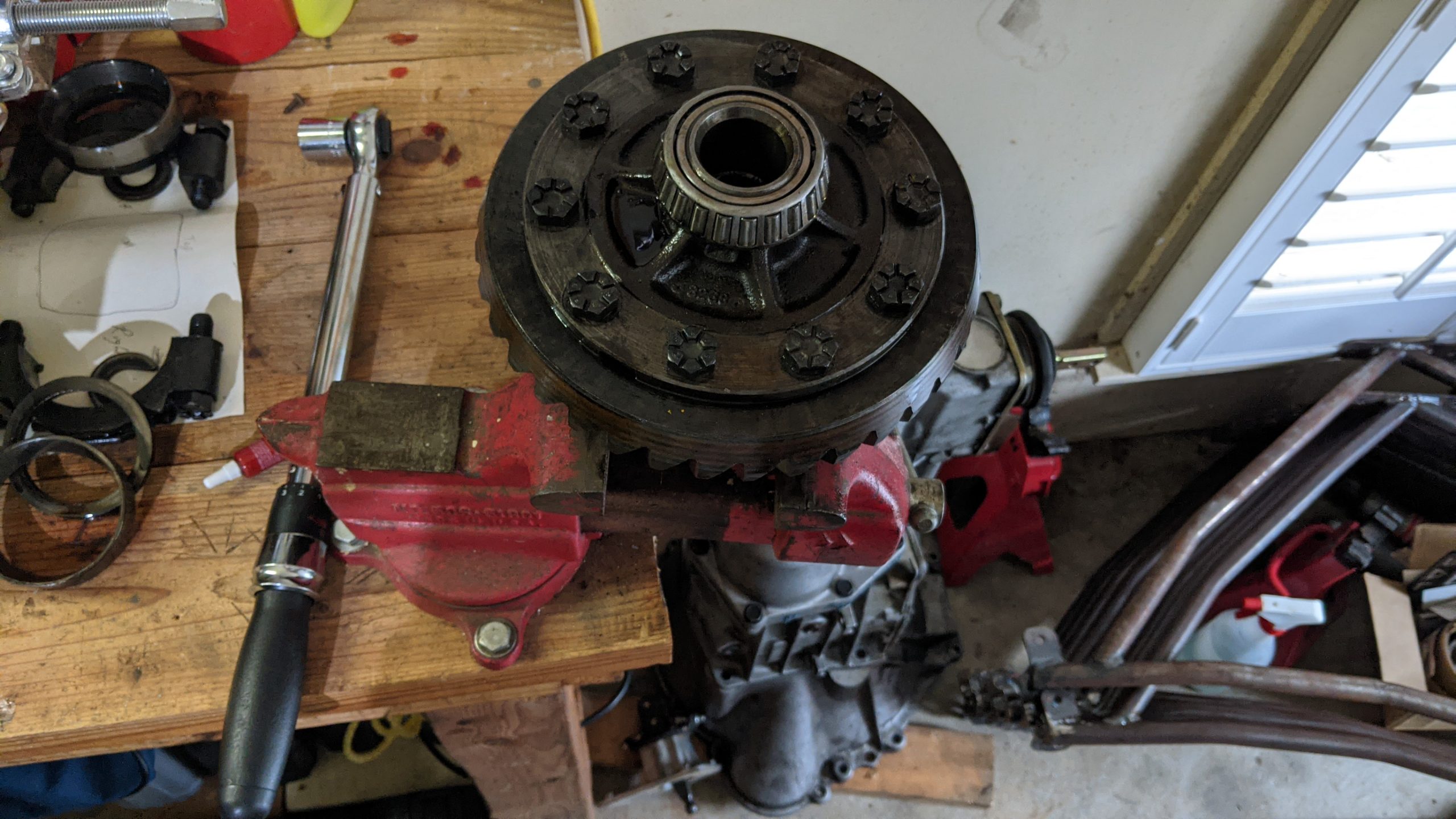 Once that was all buttoned up and secure we dropped, well ok… it took a little force to slide in, the carrier into the housing.  Lady luck again showed up as the back lash was just perfect.  No shims needed.  Needless to say we were excited it all fit so well. 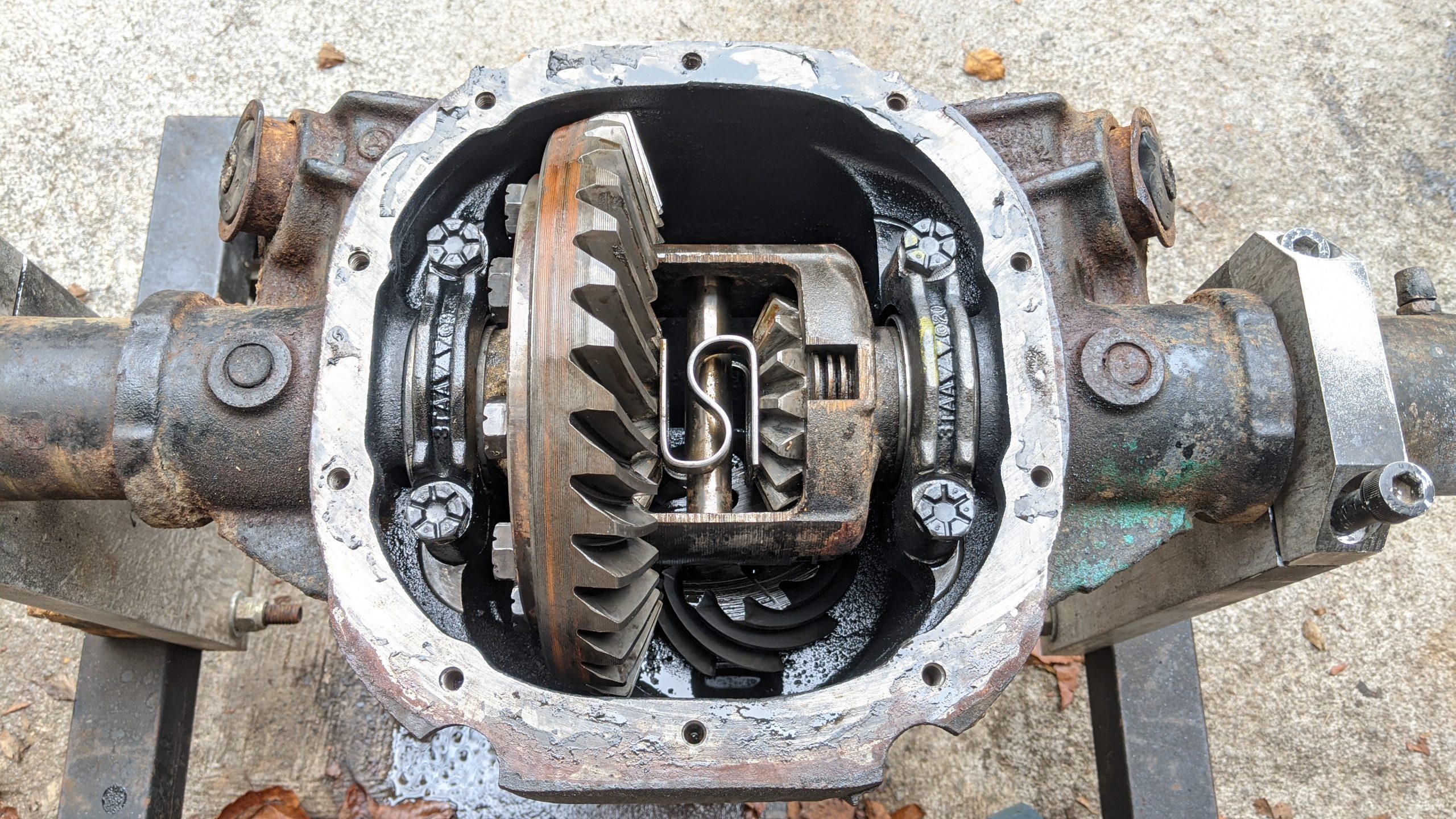 Unfortunately we had to stop here.  The only things left is to paint the axle, change the seals, paint the caliper backing plates and dust shields and then reassemble.

It’s exciting to be moving forward in reassembly.