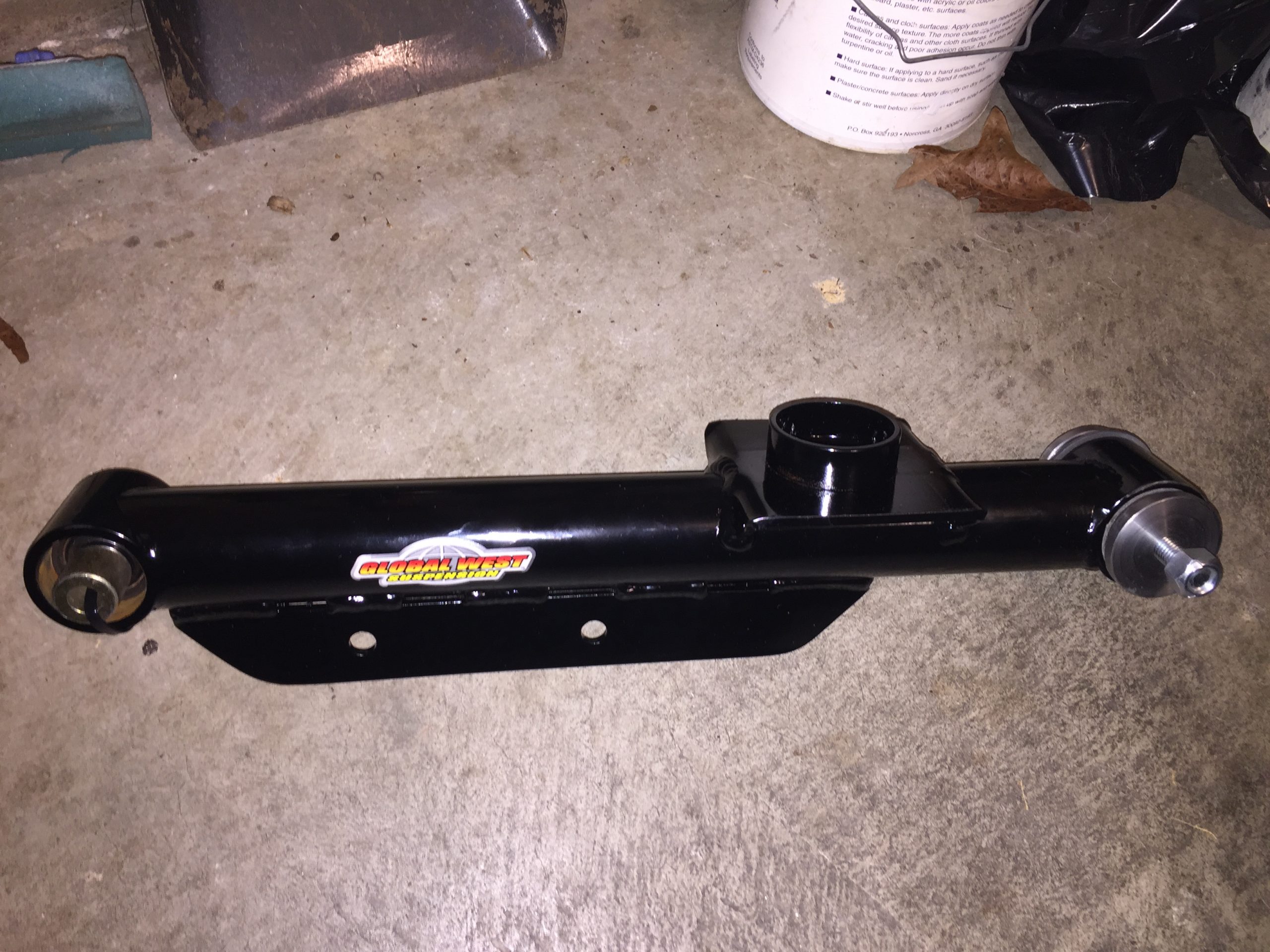 During the course of this project I’ve worked to research the sources for the parts needed to complete the car the way I want it built.  In that search I’ve been blessed to be able to get in contact with the early suppliers for Saleen.  One supplier to both Ford Motorsport and Saleen was Global West. I reached out to them about 5 years ago knowing I would need to have a bit of a custom setup on the rear lower control arms that were supplied to Saleen during the time the Saleen SA10’s were built. Hold that thought..

Today the magic word is urethane and it is widely used.  In the early 90’s rubber bushings were still widely used and urethane bushings were the upgrade.  Most every manufacturer these days uses urethane and rubber isn’t used.  This presented a small issue.
I’ve owned several Fox Mustangs over the last 18 years and have been an enthusiast longer than that.  Along those 18 years there’s been an education of parts from talking with people and engineers on how best to approach modifying the suspension to get the most out of the chassis.  The Fox Mustang isn’t exactly the “corner carver” and needs a lot of help in the suspension department to make it even competitive.  With that knowledge I approached Global West with what I needed 5 years ago.
Thought continued… Doug, the owner, emailed me back 5 years ago and assured that he would assist me in my request when the time came.  Well, the time was this January.

I reached out to Doug via email and low and behold I get a call back from him.  You have to understand how big of a deal that was.  Early in the 80’s he started supplying Ford with some suspension goodies for their Motorsport catalog. He’s still in business today building some of those parts and just about every other popular make and model of car from Chevelle’s to Mopar’s. To say he’s a busy guy is putting it lightly. Doug is in high demand because of his knowledge and resources.  So for him to reach out to me was a big deal. Getting to talk with people like Doug who watched the rebirth of the Mustang as a street performer in the 80’s is cool because I get the back story on parts and history of them.
On the phone we both confirmed that what would work best is a spherical bearing on the chassis end of the control arm and a rubber bushing on the axle end.  Great!! One small problem, no one makes a rubber bushing with those dimensions anymore.  Remember how I said everyone uses urethane now?? In this application where the stock 4 link rear end of the Fox is paired with a pan-hard bar that’s not the best combo. Rubber bushings on the axle end would help alleviate binding and keep it to a minimum.  So while on the phone Doug pecked away on the keyboard and within a few minutes he had sourced the piece he needed for this application.  He said he could make it work for me and would modify the welding jig ever so slightly so that the rubber bushing could be used. The issue he pointed out was the bushing wasn’t wide enough to fit snug within the axle mounting flange.  The solution there was to build some spacers.

So in a matter of a 30 minute phone conversation, Doug, the owner of a large suspension company, built a custom application for little old me.  I can guarantee you there are higher profile clients on his list.  It’s a testament to who he is and how he takes care of his clients.

Above is the pic of the control arm.  On the left side you can see the spherical bearing and on the right there’s the metal spacers that sandwich the rubber bushing.  Once this is installed these pieces won’t be visible unless the car is on a lift or if you specifically make an effort to look for this crawling under it. So once it is installed it will look just like a catalog item but perform like I need it to.
This control arm isn’t the only style control arm Saleen offered in their catalogs in the 90’s.  This one is the one that is in the 93-94 Catalogs 1 and 2.  The later 95-96 catalogs and beyond have a red square tubed control arm similar to the Hotchkis and BBK versions at that time.  There were other versions as you travel through the early 2000’s and beyond. Some of those designs have been discontinued.  I was lucky to have this arm I needed still made today.
Many thanks to Doug and his team at Global West for working with me. Check out their website for current suspension offerings.  If it is any kind of american iron, you’ll find suspension parts for it there