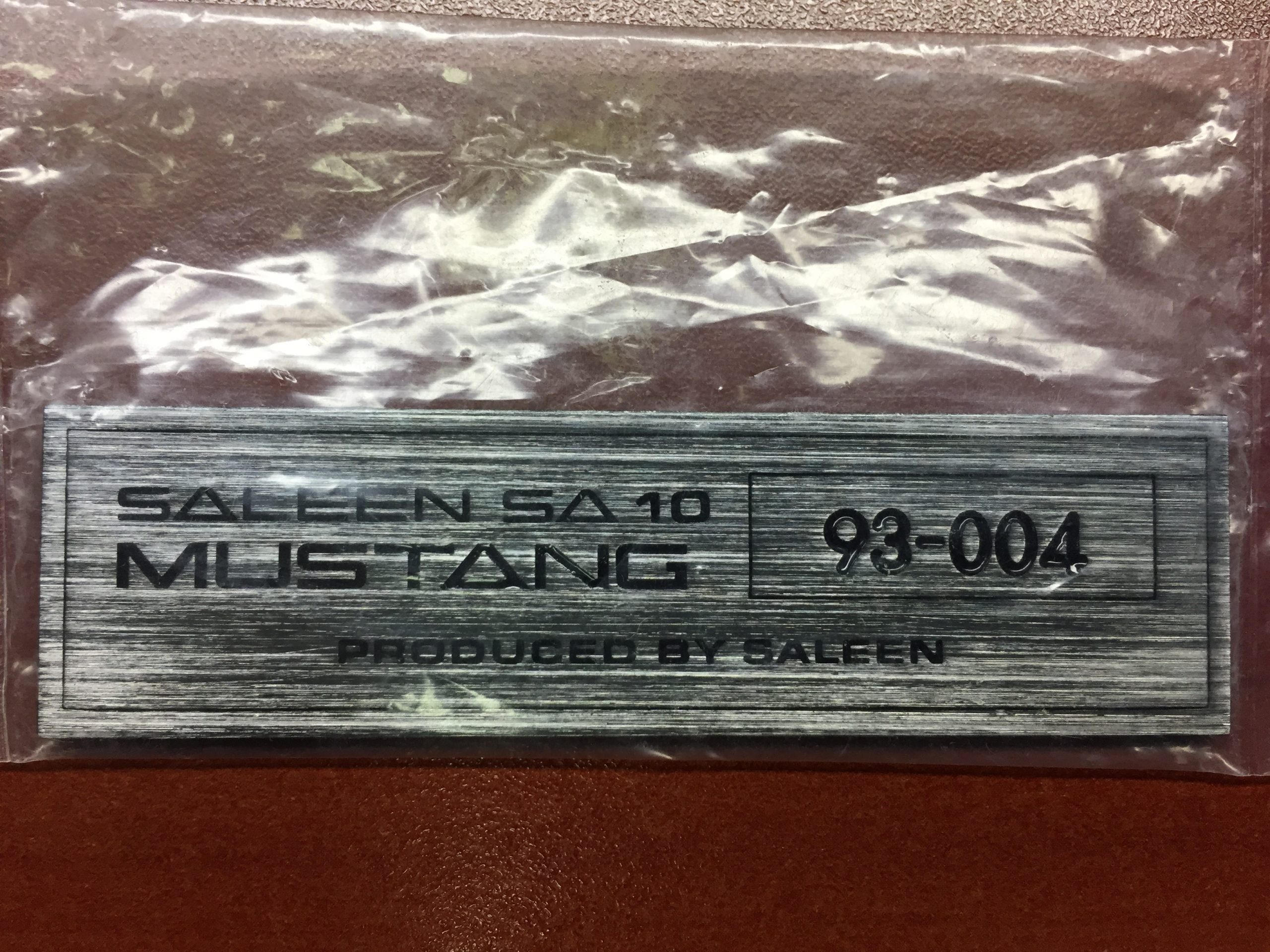 As a kid all of us have that moment in our youth that creates excitement.  For some it could be the Christmas that you got that exact gift you asked for from Santa Clause. For others it could be the birthday gift that was provided with love and care and as you got older you realize there was hard work behind that gift so that it could be provided.  I can think back to one gift that was that way for me when I was a freshman in high school.  It literally left me speechless.  I found out later that it was something my parents worked really hard to provide. The same thing happened to me at The Saleen Nationals this year in Ohio.

A conversation came up about something that EVERY Saleen has but you cannot get unless you are an owner.  So much so that a pic/copy of the title or a pic of the registration has to be provided to Saleen to get one. AND then you have to pay to get it. Each car that leaves the Saleen production line comes with one of these.  It’s not the engine bay tag.  It’s not the ground effects, the wheels, suspension or anything like that.  Saleen built cars for owners that had those items but didn’t get this.  Its…..

This is something ALL registered Saleen’s get.  You can see where I’m going.  For my car to be a full “clone” and match the other cars this will be needed.  I really wasn’t sure what I would do to try to get this accomplished.  When I started thinking about this I had a conversation with someone about a bunch of miscellaneous parts that someone bought from Saleen in a sale when the company was in transition.

In that were some various parts that weren’t used in production and left over catalog items that weren’t in high demand anymore.  The conversation about those parts turned to my car with the one statement “I think I saw your console plaque in a box with other stuff”.  This was months ago.  Fast forward to the Saleen Nationals and I was approached with the statement “I think I have something you need but can’t afford.”  A part of me said “Nah.. no way.” So we walk over to some boxes in his truck.  He starts looking through them one by one.  Then one lands in front of me that has some interesting stuff in it and I think, shoot, let’s start digging just to see what’s in there.  So I lift up one thing and there it was… I was immediately speechless.  At a loss for words.  I tried to play it off cool and throw it over in front of my buddy and say “Well… there it is.”

This is the shifter plaque that was made by Saleen for my car 23 years ago.  This thing bounced around in files, boxes and through someones hands and through some sort of fate landed in my hands.  it is one of the ten that were made for the SA10’s.  It makes sense that if they were going to have one made that they have all 10 plaques made.  Somehow this one survived all the travel and the transition in Saleen.  To say I was excited is an understatement. Knowing that I now have THE piece produced for my car is beyond belief.  AND to beat all the person who had it didn’t let me pay a dime for it.  Sure, there was a little fun prior to that statement asking me what I thought it was worth.  He knew it was priceless to me. So a gift was given to me for this car that blew me away.  And I think it is no surprise to anyone in the Saleen community that the person who ended up with this part was Mark LaMaskin of Performance Autosport.  He is a valuable resource and conservator of these Saleen vehicles.  It was only fitting that he end up with it. He and his company have helped me with certain aspects of this project.