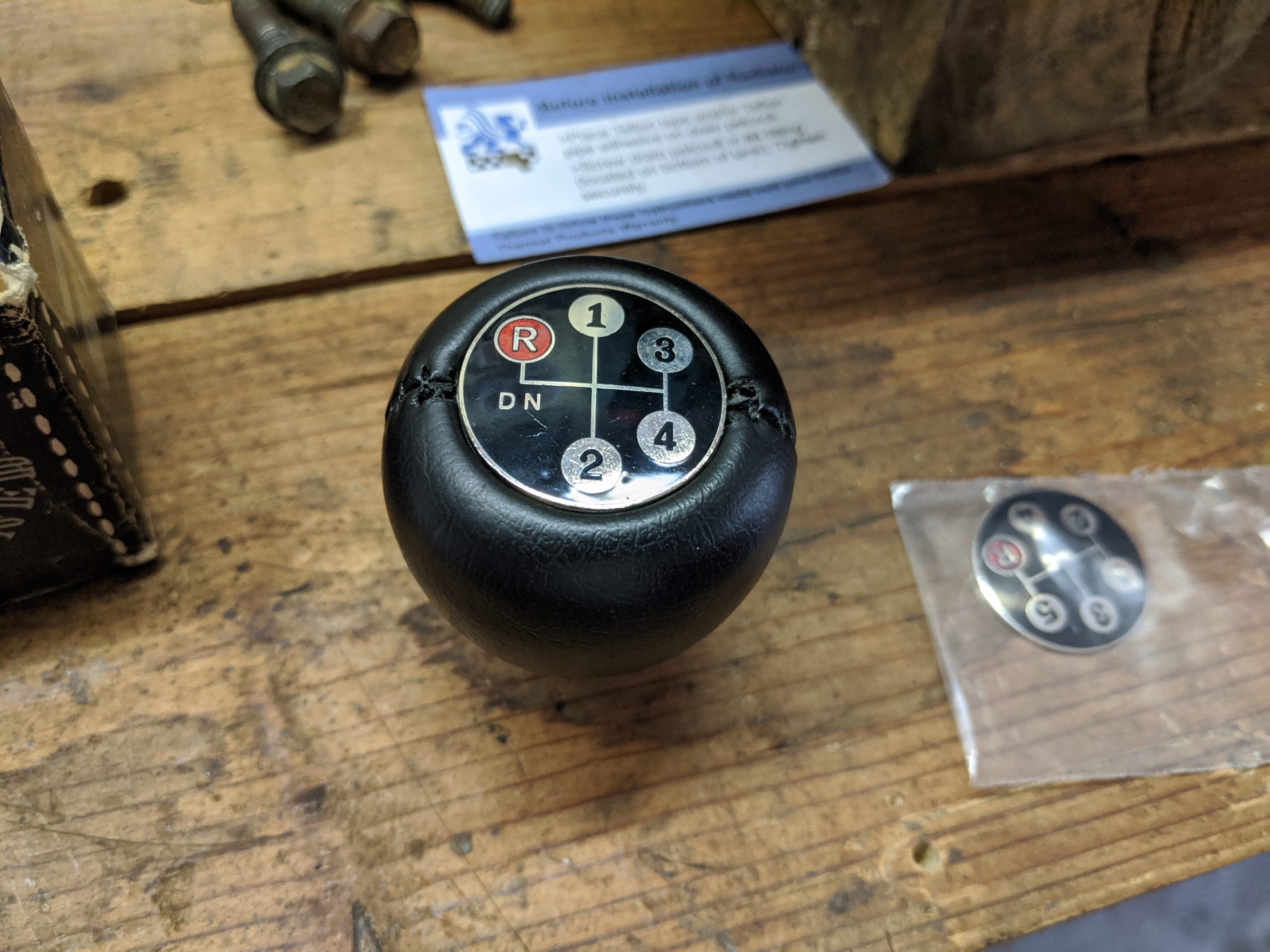 If you have been a Foxbody Saleen owner for any amount of time you’ve found out that there are some items that Saleen used which were off the shelf items at the time the cars were produced.  By that we mean that the parts were something that most people could buy at a parts store if they were to look in the right places.  The Pioneer stereo’s that were put in Foxbody Saleens from 1988-1993 could have been bought at any Pioneer radio dealer or installer at that time. The same goes for the shift knobs.

So a correct shift knob was in need for this car. We had something in our stash that may work.

You can see that this one is a four speed shift knob.  We bought it off of eBay many years ago for about $20.  The reason we bought it is because it had the correct look and shape for the 89-90 Saleen shift knobs. In the stash of parts we had there was a correct medallion.  We had the idea that one day we could swap medallions and have a threaded insert made for this shift knob because this one was a slip on fit with a set screw. 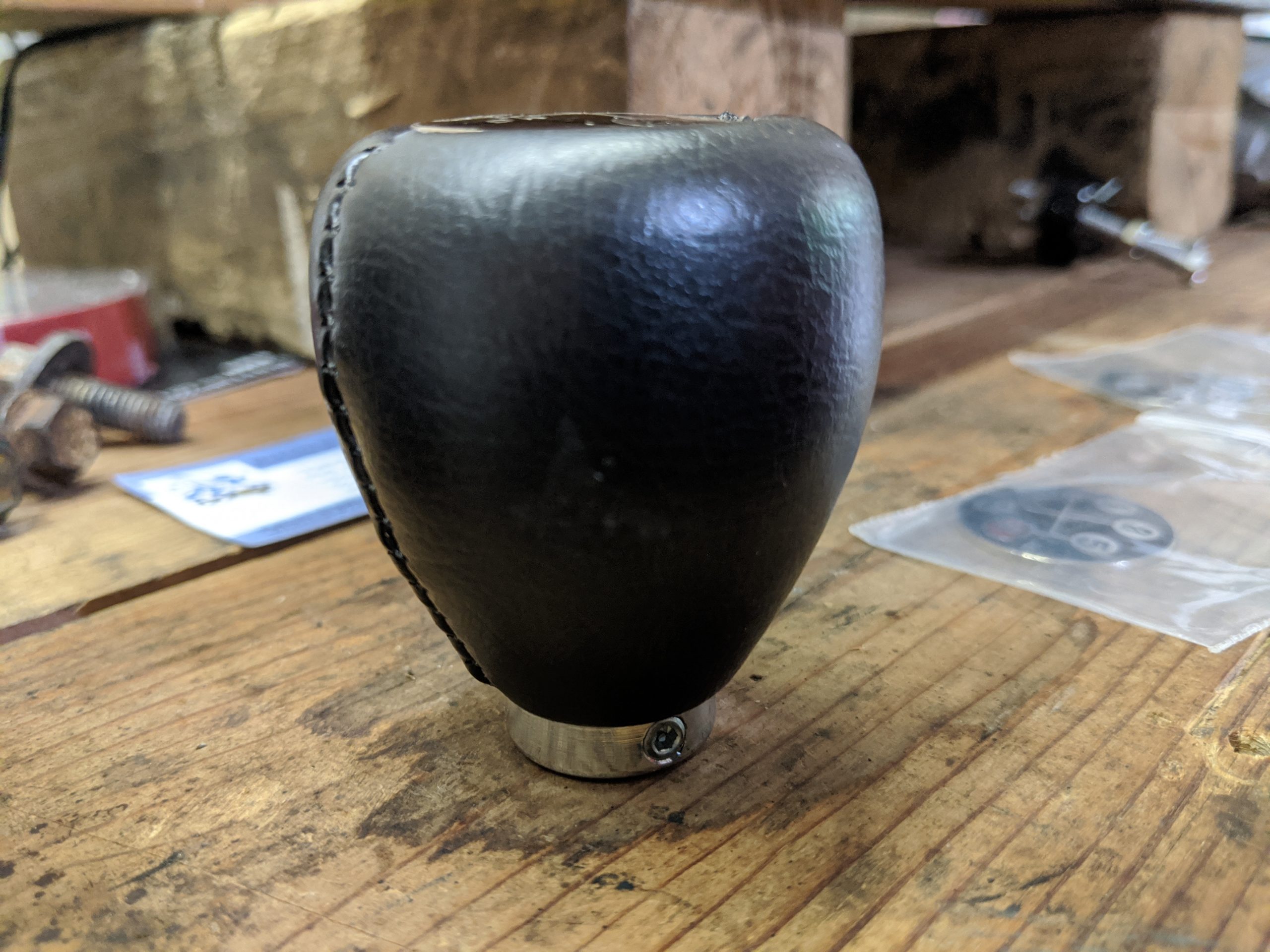 We took on the removal of the four speed medallion with a heat gun on low.  Even though we were as careful as can be, the vinyl just didn’t hold up. Two spots ended up coming apart. But we did get the medallion off. 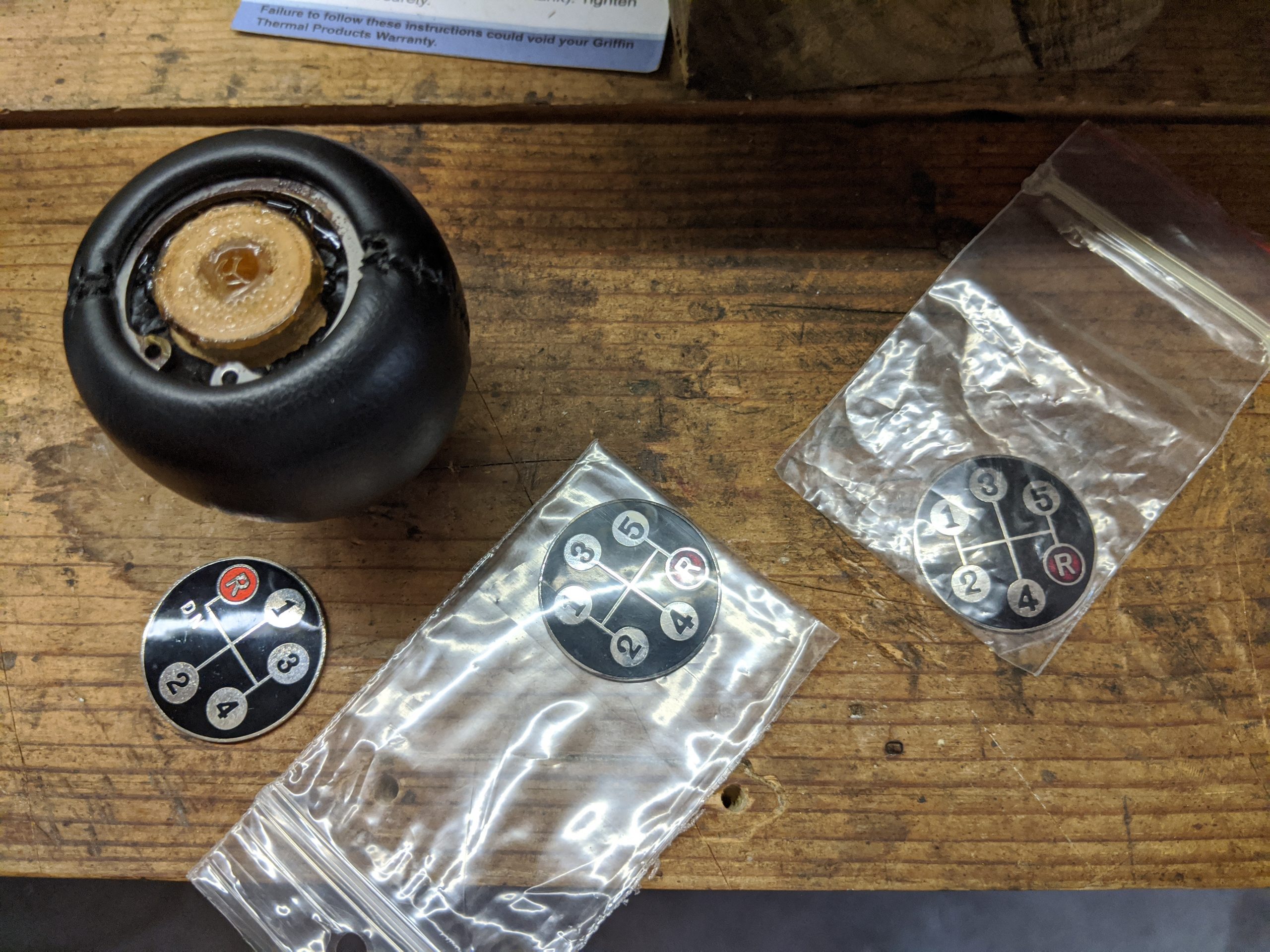 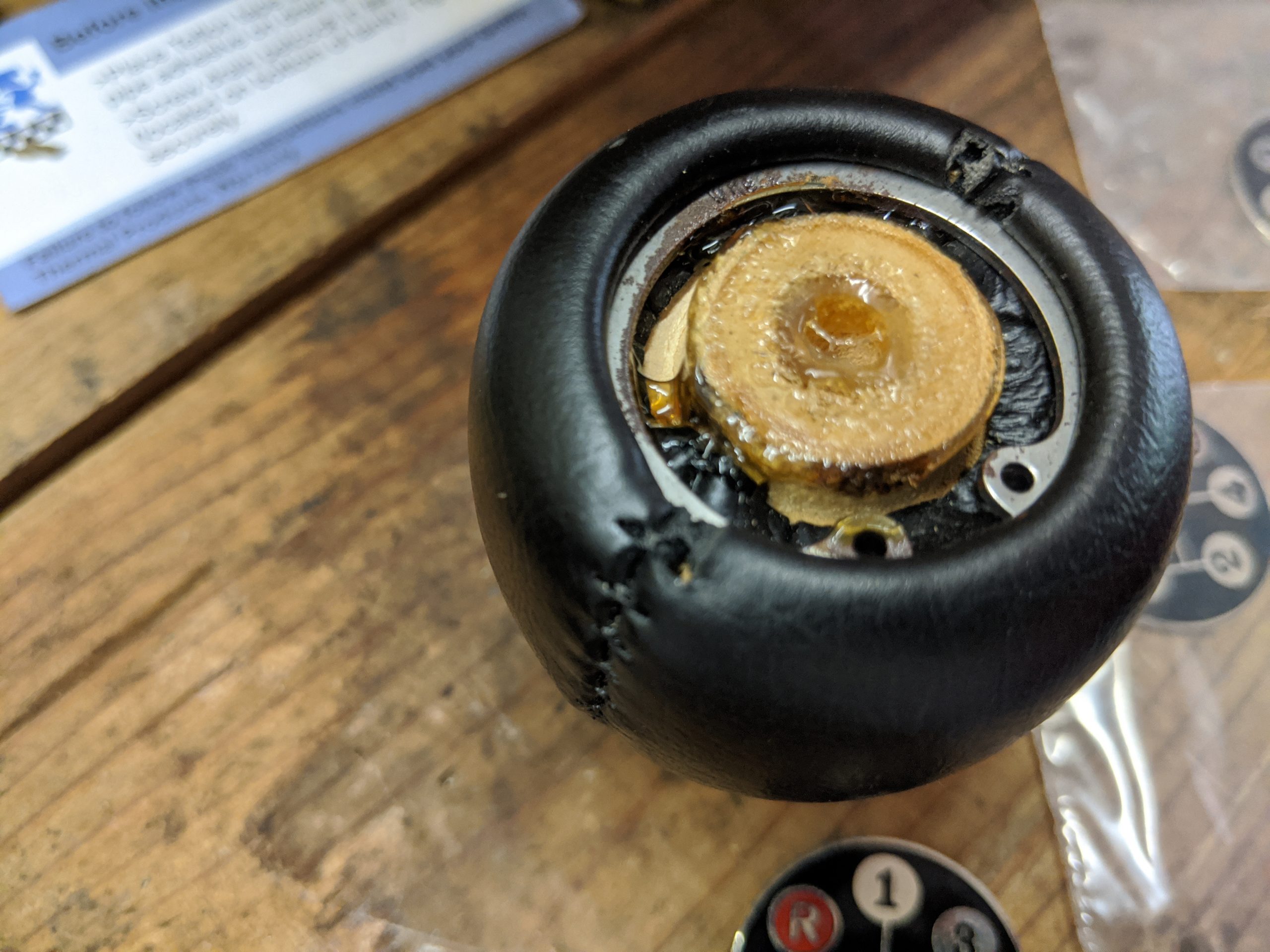 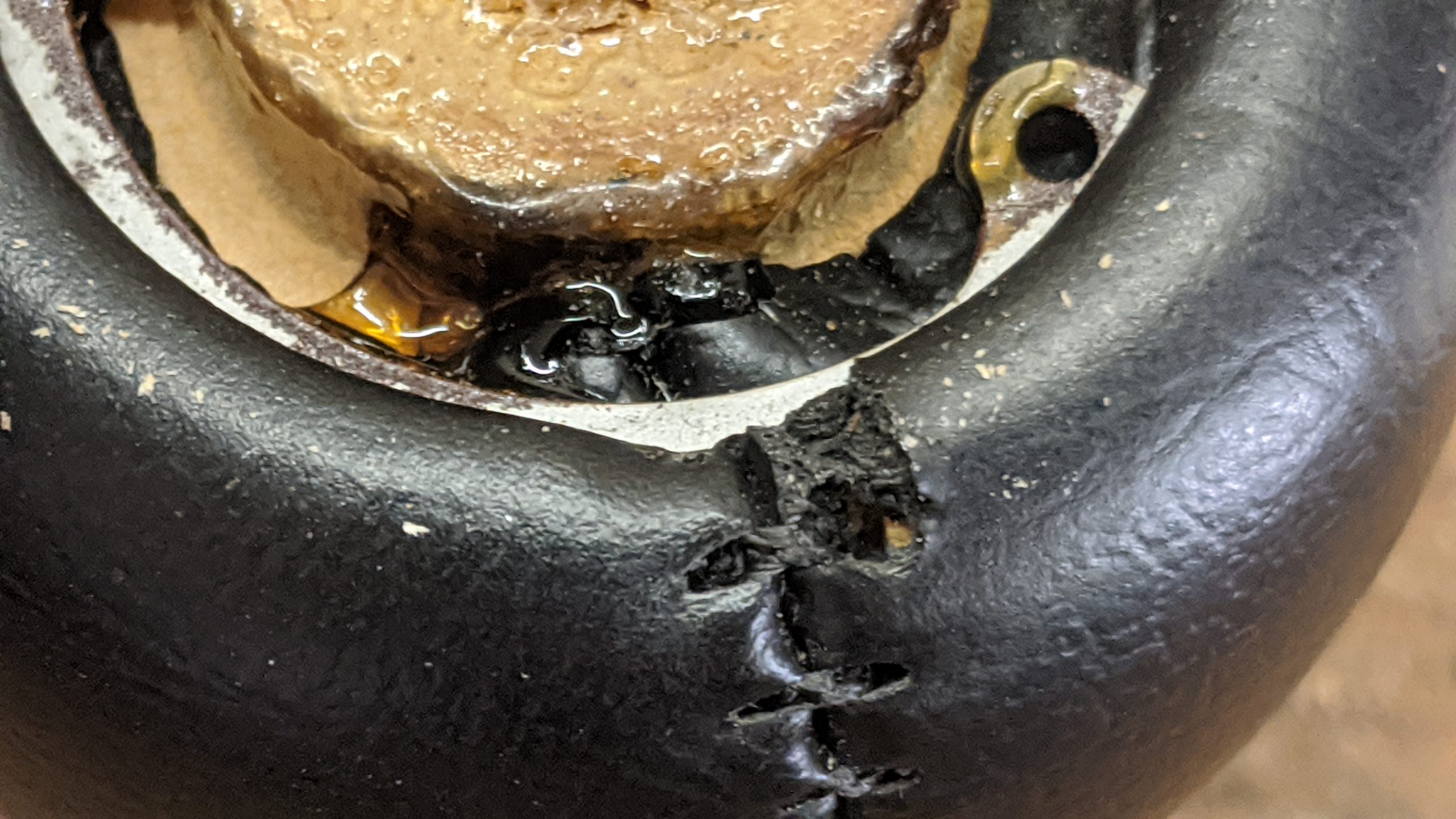 You can see in the images above that the tears occurred at the seam where it comes over the top.  This is a high wear area, so unfortunately it has to be recovered.  Ultimately this part of the cover will come apart more.

We ended up calling up our friends at Morgan’s Auto Trim.  The owner of that company is the one who did the seats in Almost 4, our Saleen SA10 project, and those seats can be seen in this post HERE.

Matt got right to work in removing the old vinyl cover 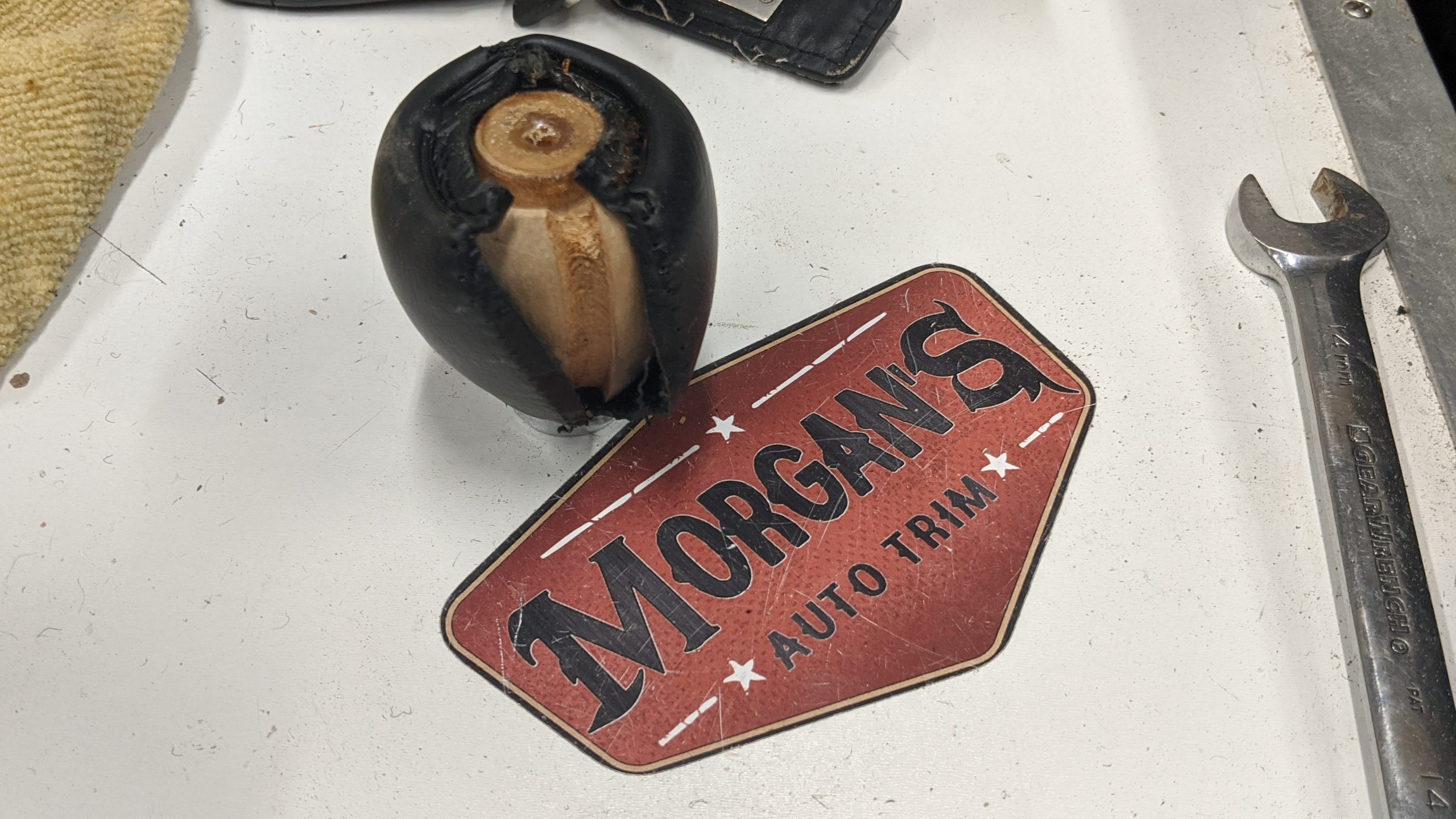 To get the shift knob covering right, Matt had to remove the knurled insert. 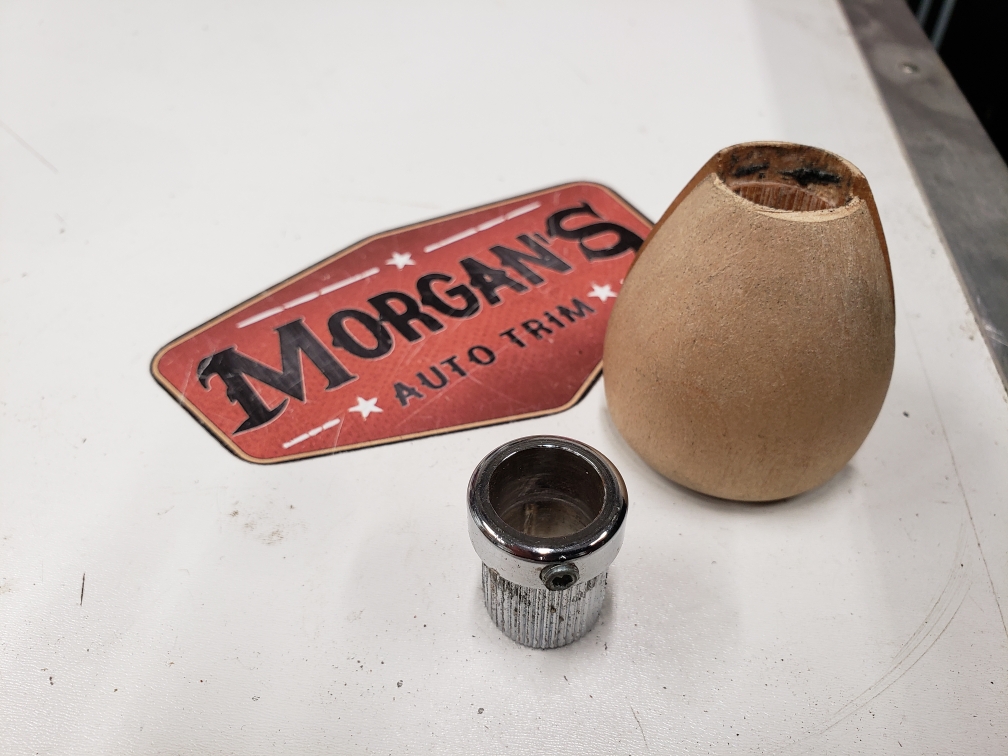 Once that was all separated Matt was able to get the shift knob all recovered in leather. 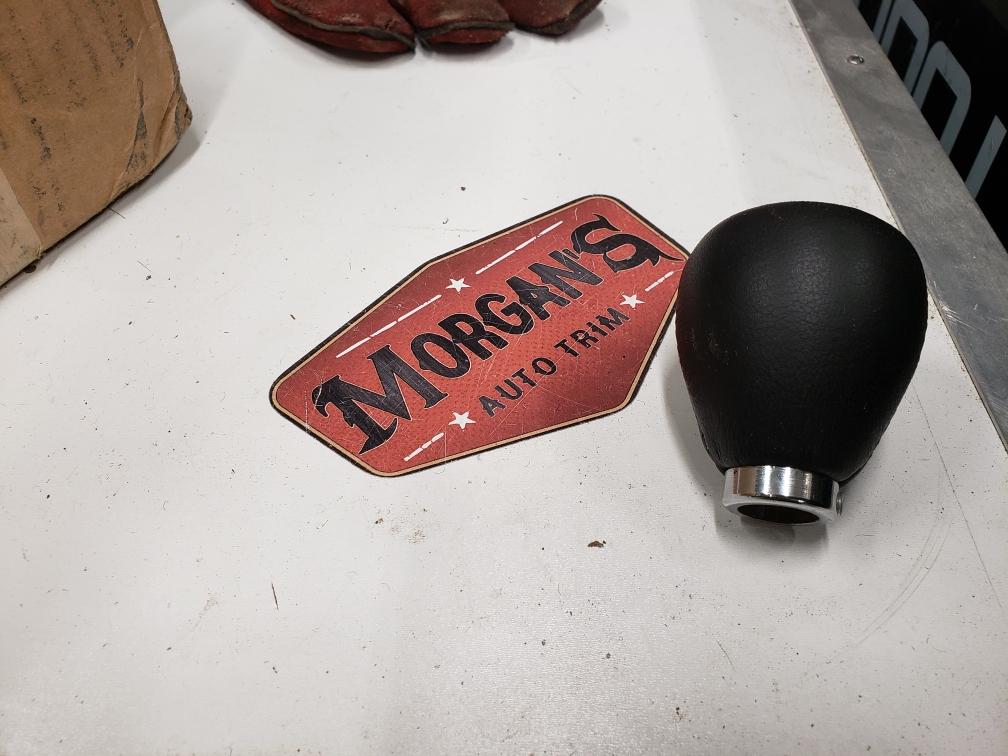 During the process we had a machine shop create an aluminum threaded insert to go inside the collar.  We Also had to drill out the shift knob wooden area to allow the shift handle to go far enough up into the shift knob. 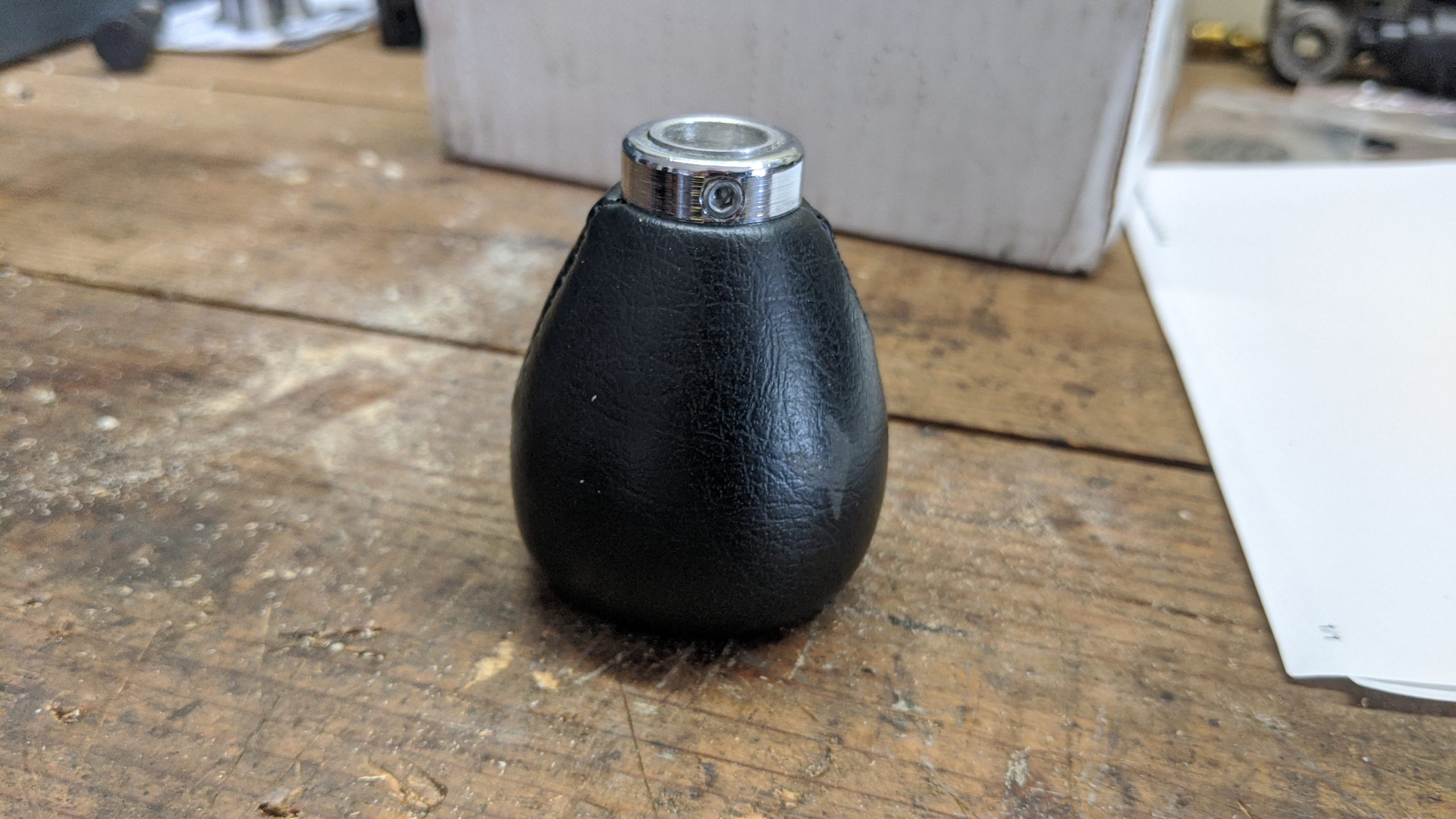 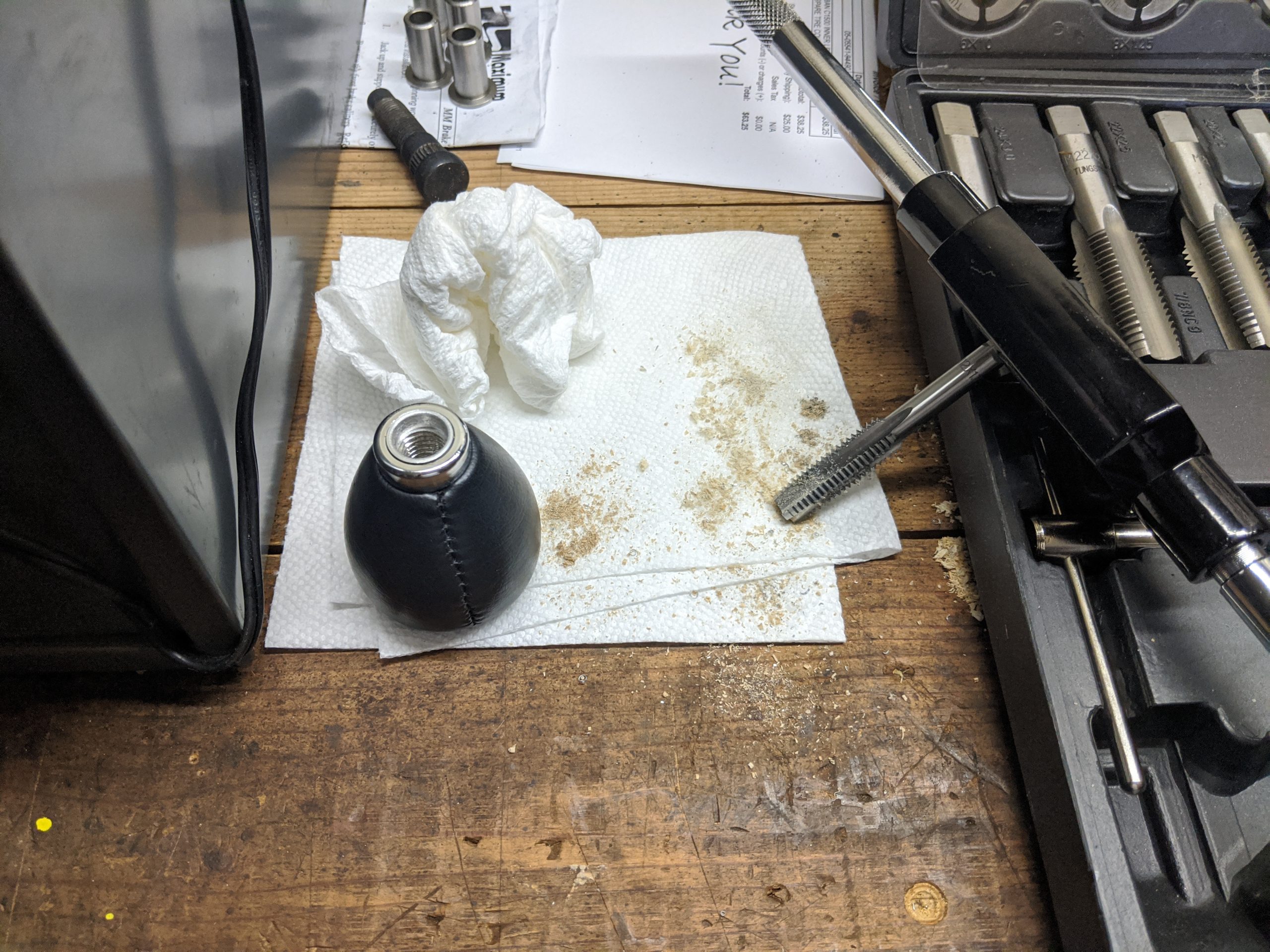 Once that was all said and done, all we had to do was glue on the correct medallion and for less than $100 we have a very nice OE style Foxbody Saleen shift knob that we can put in our Bleakley Saleen. 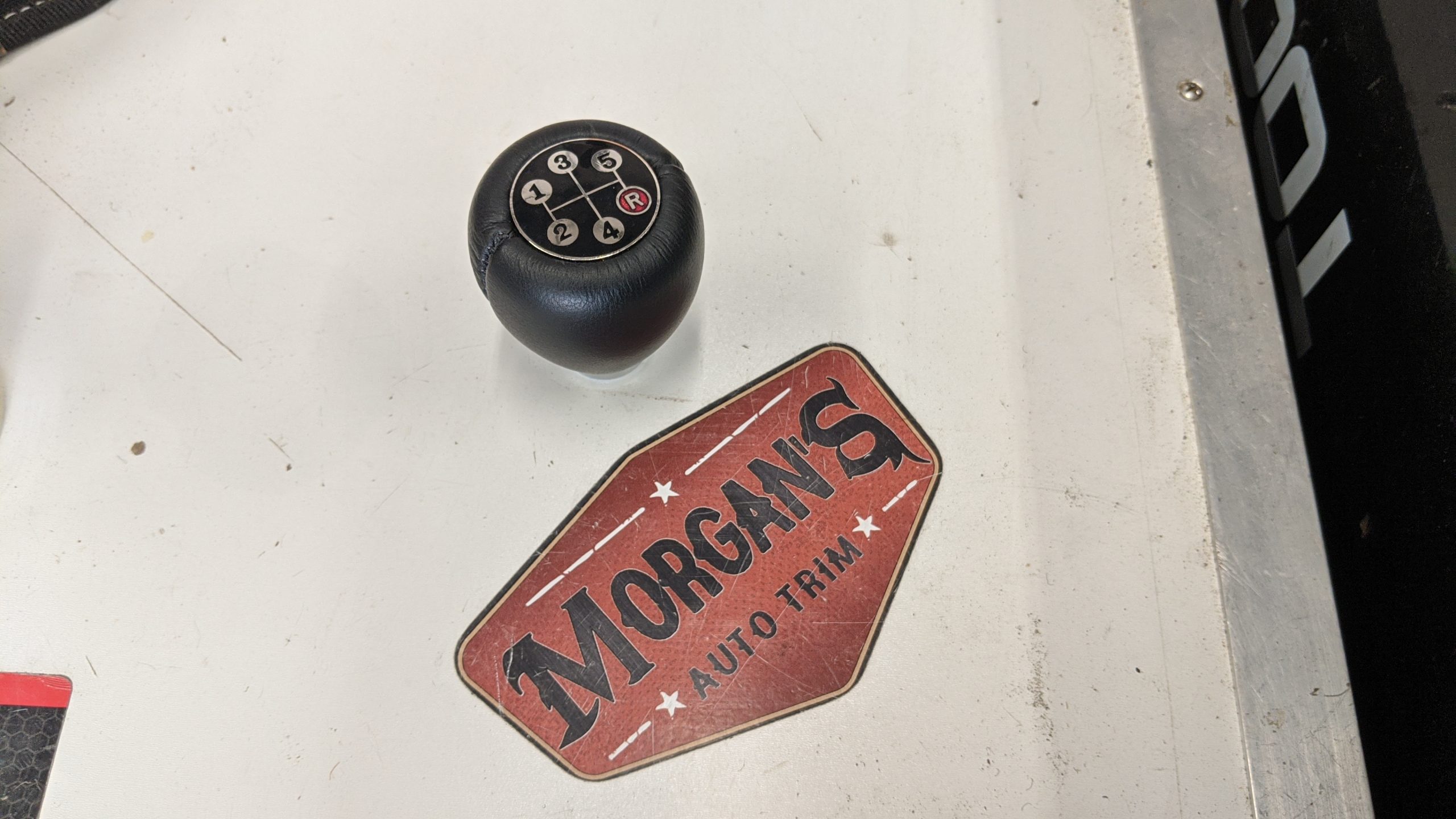