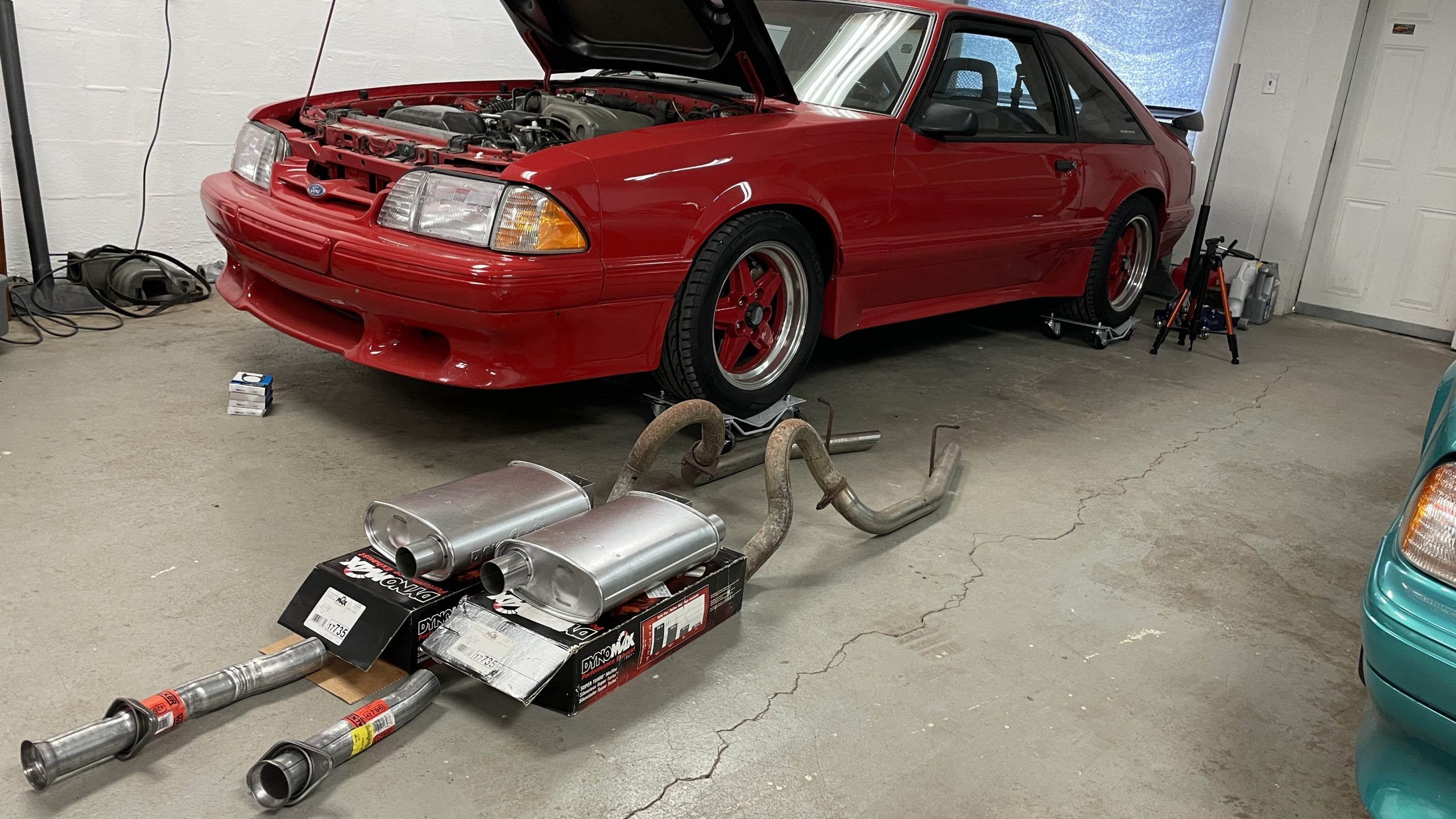 Dynomax Cat Back Discontinued?? – No Problem…

In this previous post we noted that Tenneco, the parent company of Dynomax, was discontinuing the 17735 Super Turbo muffler.  The muffler itself is still being produced, what they are not making is the mustang specific muffler with the bracket.

Over the last five years or so there are companies who are slowly discontinuing specific parts for the 79-93 Foxbody Mustang Cars.  Dynomax has slowly stopped making the 2.25″ kits for these cars and that makes sense as most everyone buys a 2.5″ kit or bigger these days. All in the name of performance which makes sense.

Buuuut, that makes things more challenging when you’re trying to keep things looking original or doing a restoration.  This is why many of the NOS parts are going up in value.  While there are companies like our partners at National Parts Depot making specific parts that “fill the gap” for factory correct parts, there are still gaps when it comes to certain parts. Especially for the Saleen cars.

Originally the plan was to take the 17735 mufflers we purchased a while back and just replace the Flowmasters that are on the car with them.  But, in inspecting the tail pipes that are on the car they have all kinds of red overspray on them from the previous paint job.  That overspray has clear over it too.  It would take A LOT of labor to get the paint off and then polish the tips back to OE finish.  We do have another set of LX tailpipes in the stash but they are cut a little short to reach the muffler.  The other issue is that the flow tubes going into the Flowmasters are nice and rusty.

So we decided to go another route… 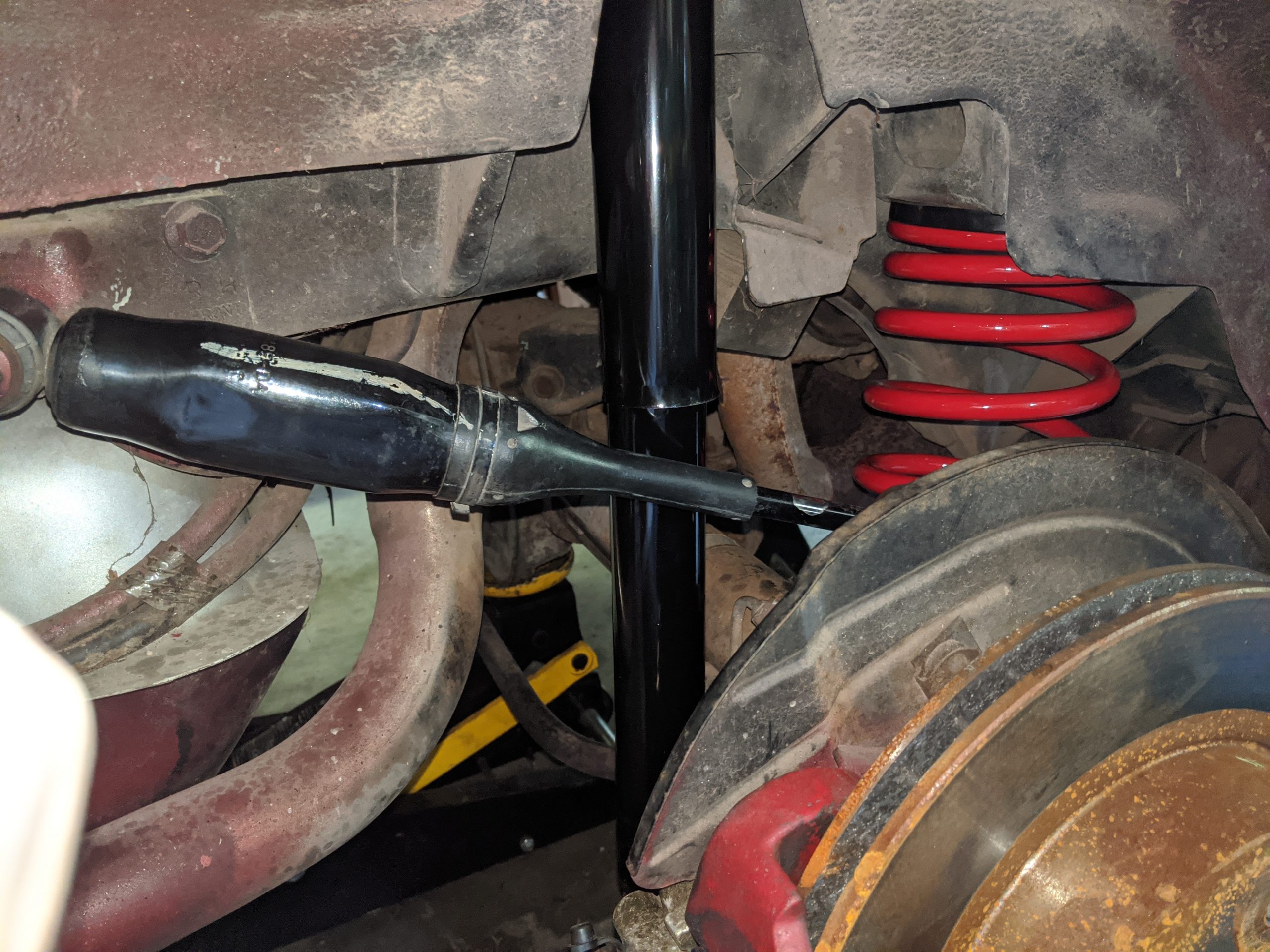 In the pic above you can see the overspray on the tailpipe and on thee gas tank cover.  There’s more beyond what is shown in the picture. It’s pretty bad. 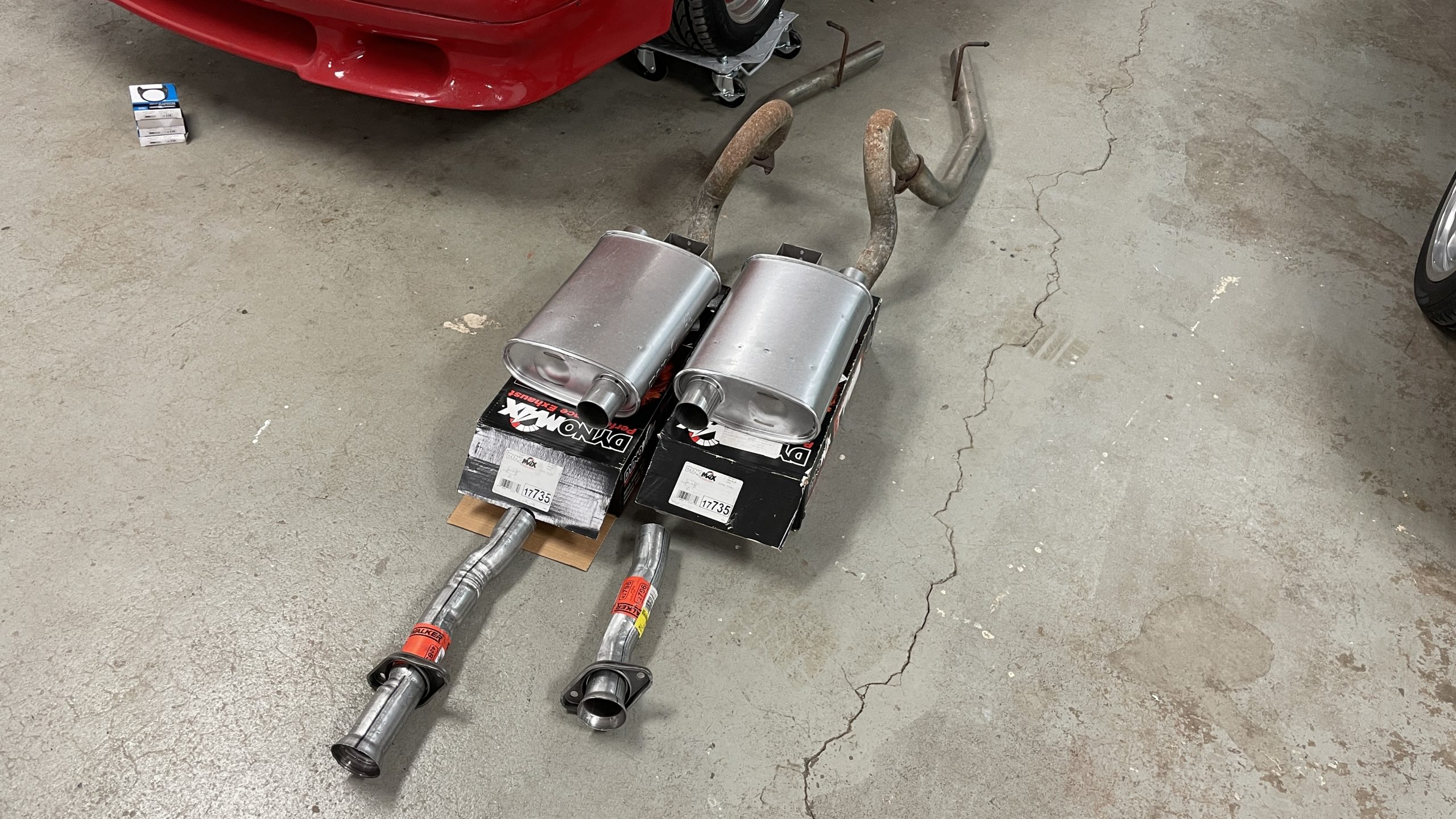 So instead of being able to buy a complete 2.25″ Dynomax Cat back with stainless tailpipes, we decided to assemble one.  All of the parts in the picture above are discontinued except for the flow tubes. We’ll need to put a little elbow grease into the tailpipes to make them look nice but that’s nothing compared to what we would have had to do with the ones on the car. 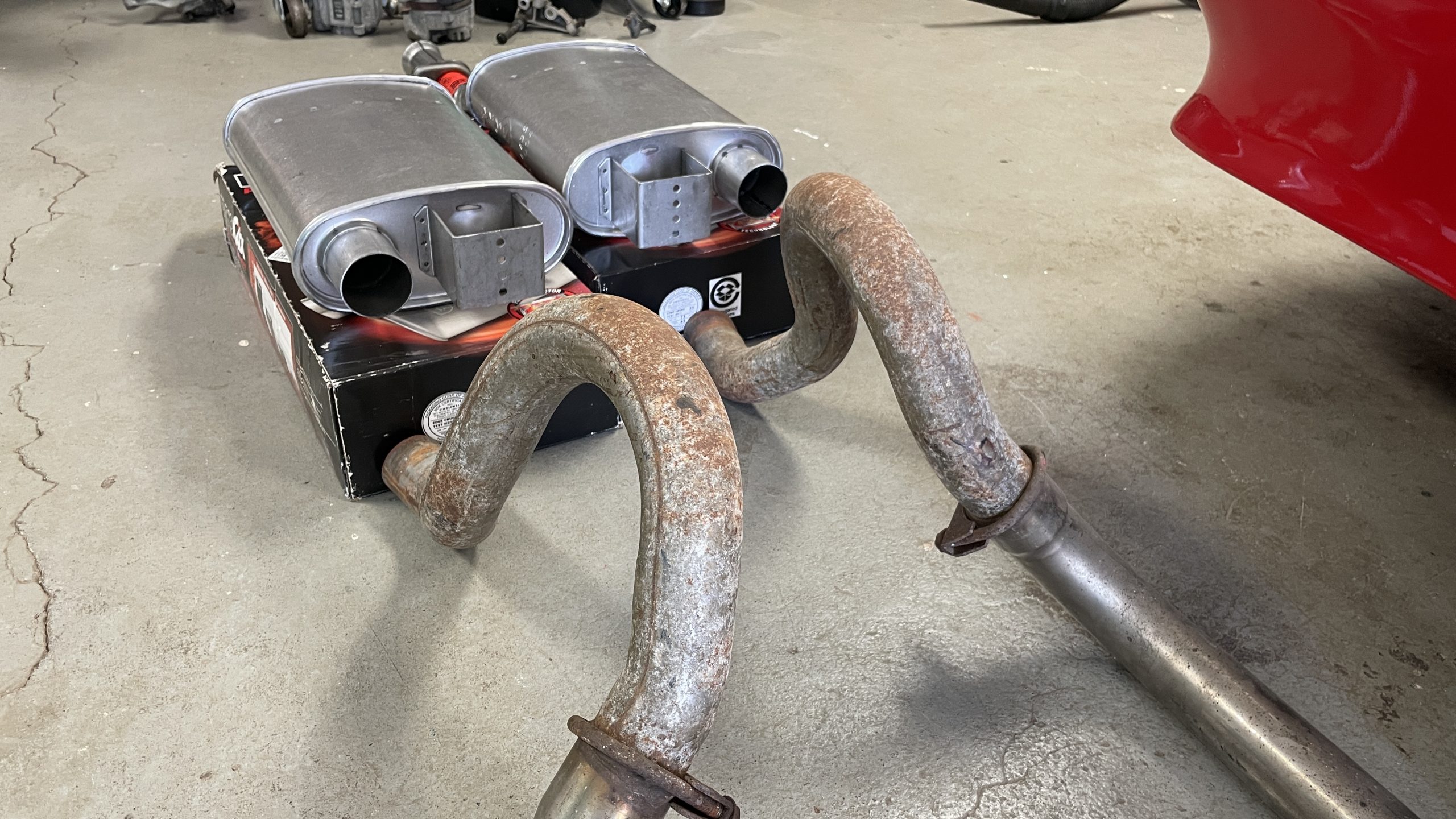 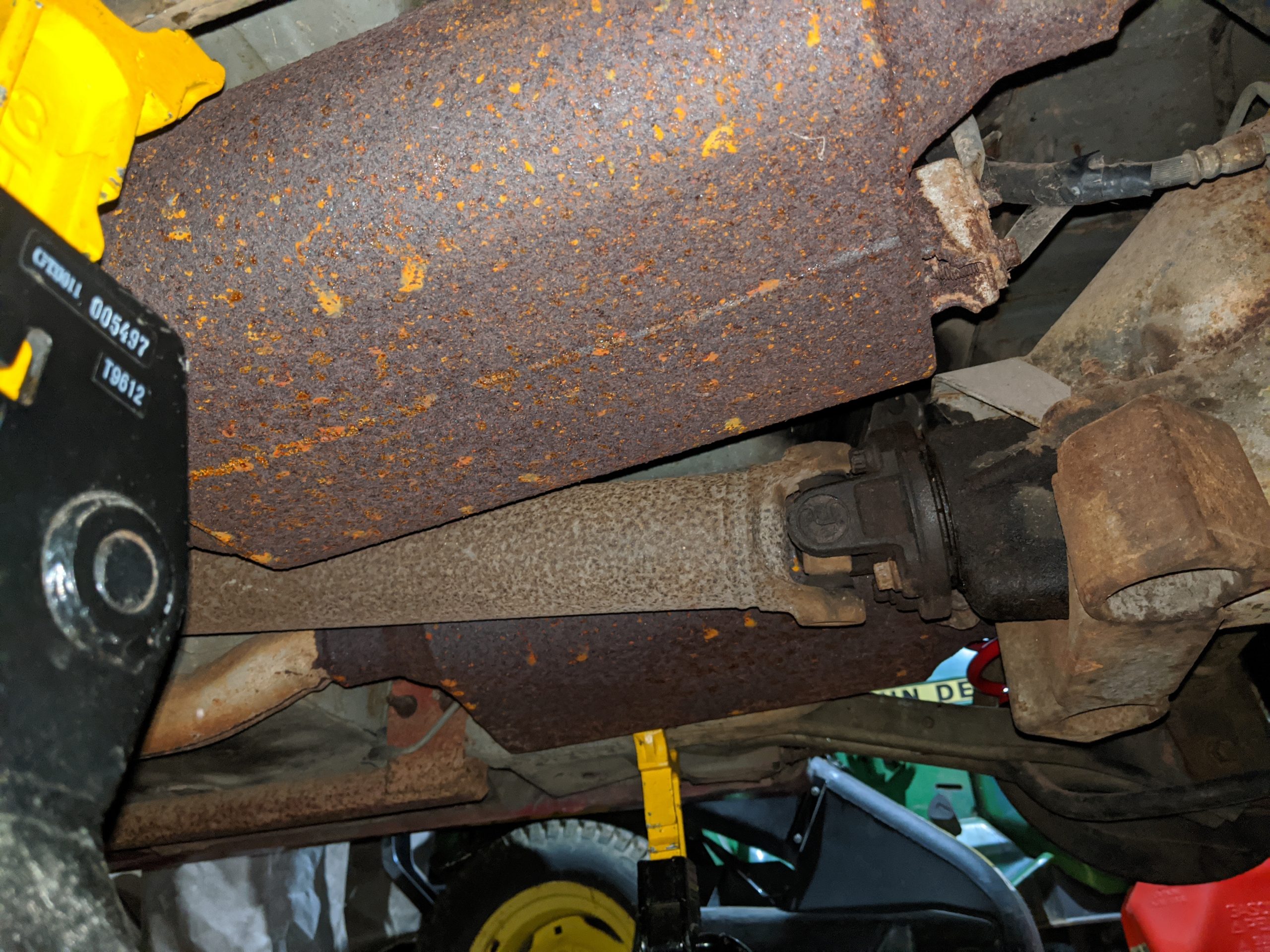 So as you can see in the pic above, the bracket is very small just like an OE Ford muffler bracket.  Nothing like the Dynomax bracket.

That being said, we’re going to go with the Dynomax mufflers.  We really like the sound of them with the off road H pipe AND they were an option that could be put on the Impressor Stage II.  Although, the factory mufflers would have been replaced keeping the OE flow tubes and tailpipes. We’re going a step further with a complete 2.25″ cat back kit.