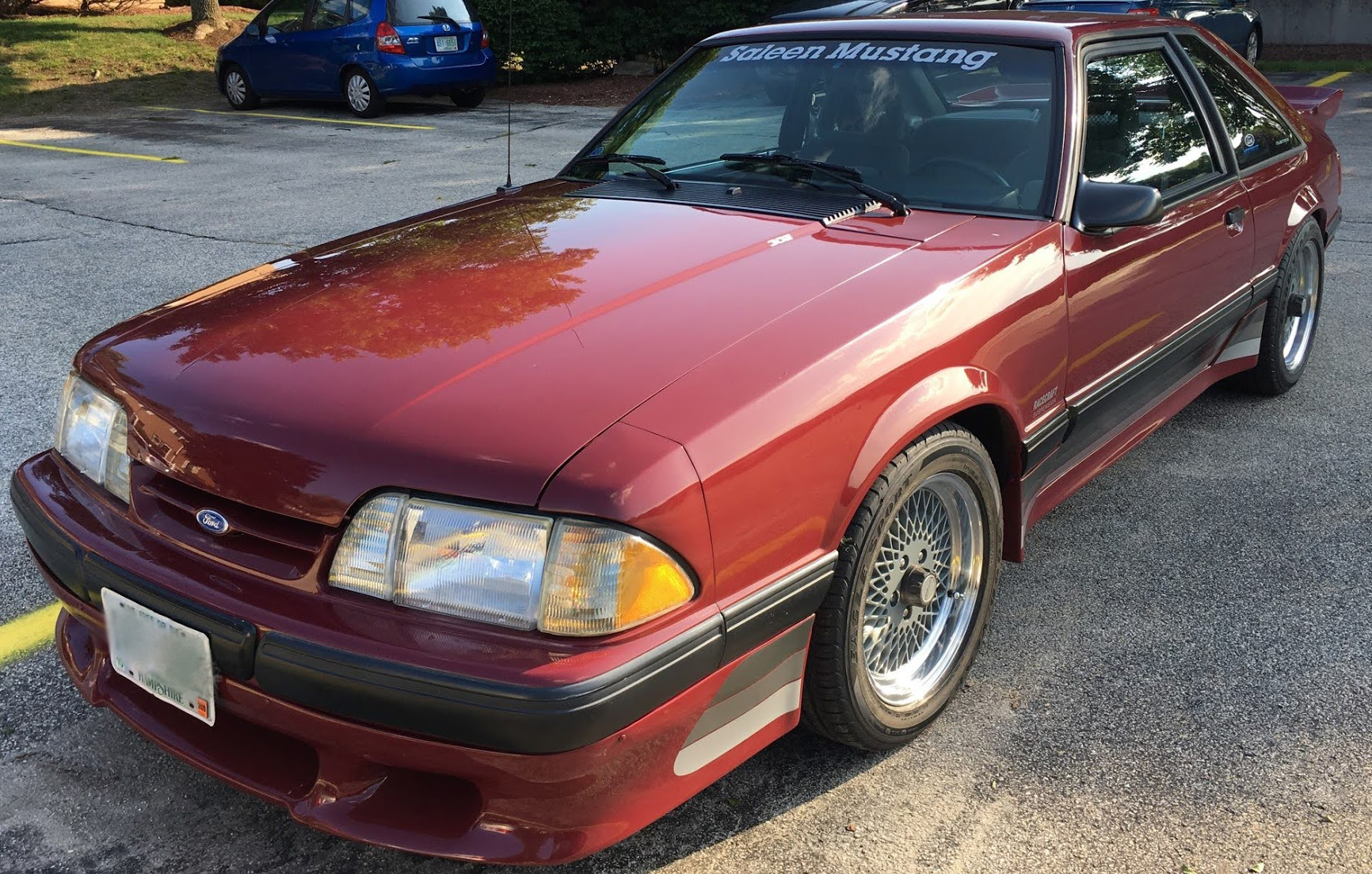 Genetically Identical – One Fox Mustang’s Transformation into a Saleen Clone

The terms “Tribute” and “Clone” are often thrown about in conversation when it comes to someone making a car look like a particular model. For instance, the “Eleanor” car in the movie Gone in 60 Seconds is more of a “Tribute” to a GT500.  It’s a modern interpretation of an old design. A car made to resemble a Shelby GT500 but it’s not really a “Clone” is it?

Let’s look to Websters Dictionary for a little clarification.  I know I’m getting wordy here but there is a clear difference between the two.

Websters defines Tribute as: “something (such as material evidence or a formal attestation) that indicates the worth, virtue, or effectiveness of the one in question”

Websters defines Clone as: “the aggregate of genetically identical cells or organisms asexually produced by or from a single progenitor cell or organism”

Ok, ok.  Where am I going here.  The breakdown is this, a Tribute has virtues or effectiveness.  In other words “similarities”.  The key phrase of Clone is “genetically identical”, in other words an exact replica. 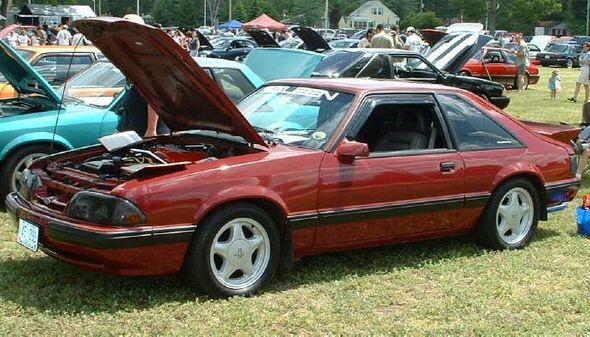 In the automotive world very few are going to go the extra mile to make an “exact replica” of a particular model. Many things come into play in doing that.

1. is the financial commitment because the parts are hard to come by (let’s be honest, clones/tributes are made of expensive popular models produced in small numbers) and are expensive.

2. the commitment to recreate accurate details takes extra time and effort.  Most of us go down the route of a Tribute.  Because it gives you, the owner, an opportunity to give an artistic rendition of a favorite of yours. Freedom, if you want to call it that, for interpretation.

For some of us, that’s just not enough. It has to be exact. Just like the real deal. So we end up building an exact clone over time of a car that would not be affordable to buy.

Jay Briand is one of those people that it wasn’t enough to make a tribute. And we get that around here at Purist Motorsports. His 1988 Mustang is one that has transformed through several stages under his care.

It started life as a four cylinder that he picked up as a roller from Rick Menard. Rick is known very well in the northeast as one of the larger Fox Mustang wrecking yards and has always had choice parts.  The car got a V8 swap right away from the 1983 Mustang T Top Jay was driving.

Sadly rust had taken a hold of more of the 83 than was possible to repair without a lot of greenbacks invested.  So it was set out to pasture. Jay tediously mated the 83’s  engine wiring harness one wire at a time to connect into the 1988’s factory wiring. The car stayed carburetion through the V8 swap. He was able to drive this car for several years like this. 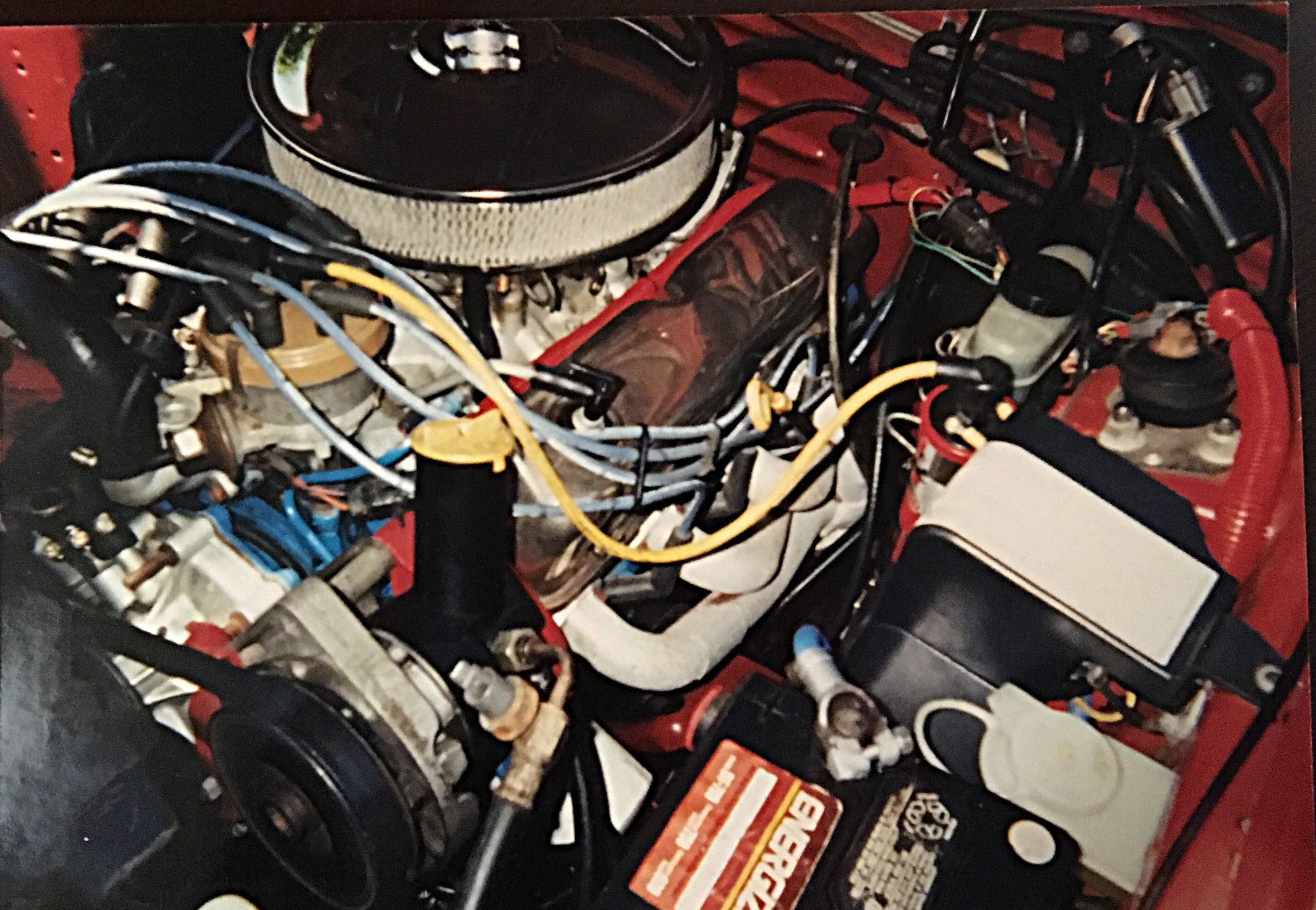 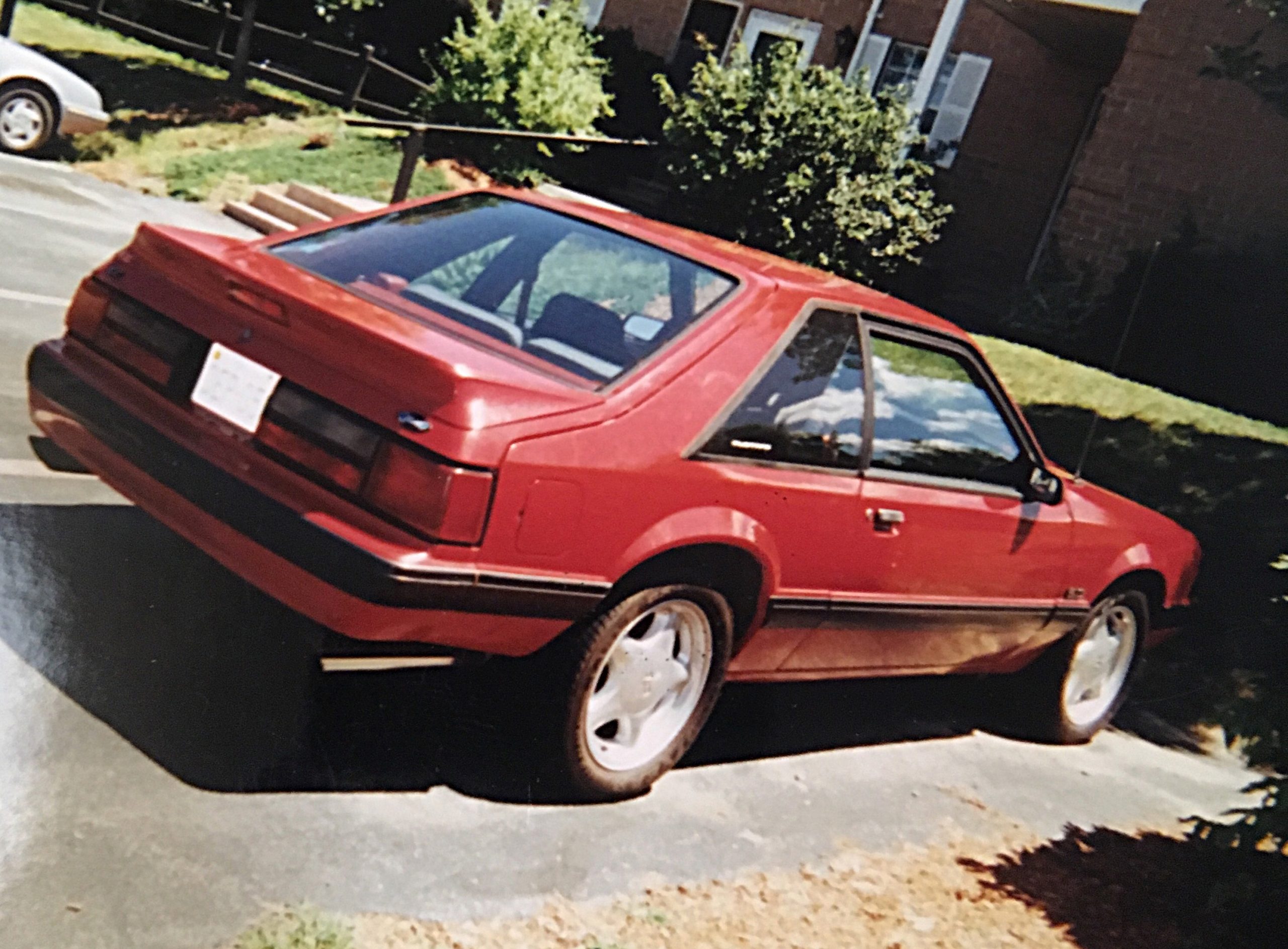 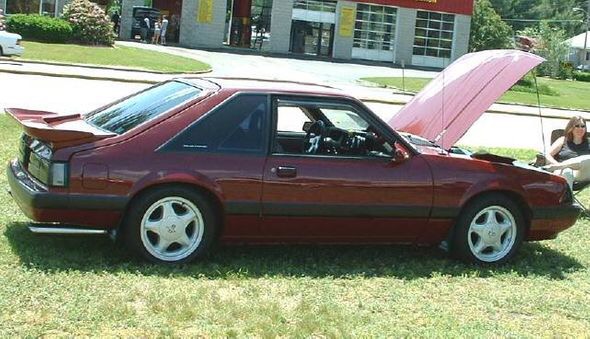 Jay had a good friend who sadly wrecked his 1989 GT in an accident.  Jay was able to take that misfortune and buy the whole car from his friend and use all that he needed to transform the 88 four cylinder into an SEFI fuel injected, roller cammed 5.0, with factory wiring.  We’d call that a win.

Through all of this there was something that was brewing inside Jay’s mind.  He had been introduced to Fox Saleen Mustangs and thought to himself that he could easily build a clone.  Not just any clone, one made with OEM Saleen parts and bits.

When you go into the details like this it takes time and since the car wasn’t in disrepair it gave Jay plenty of enjoyment while he was chasing down all the Saleen parts.  More than half the fun of any build is the chase.  Once you’re on a mission it becomes fun finding the original pieces and parts it takes to make a Saleen. And as usual in any car build, each step compounds the next. 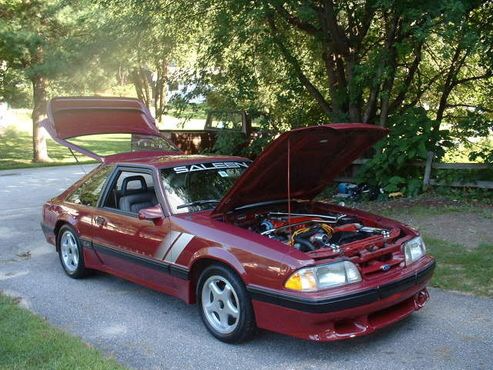 When he found the ground effects he was able to score a good deal on them in trading for a set of stock tail lights.  During this time he was befriending a few Saleen enthusiasts and this created all kinds of ideas on where to go with the car. The first step was the ground effects and ultimately that led to making the car into an SC tribute when buying some parts from someone he had befriended in the Saleen arena.

Once Jay had all the ground effects parts he hired a local paint shop to get the ground effects to match the car. Once those were on Jay was able to make the car into a tribute for a bit with some 4 lug American Racing wheels to replicate the 1990 and 1991 Saleen SC look. 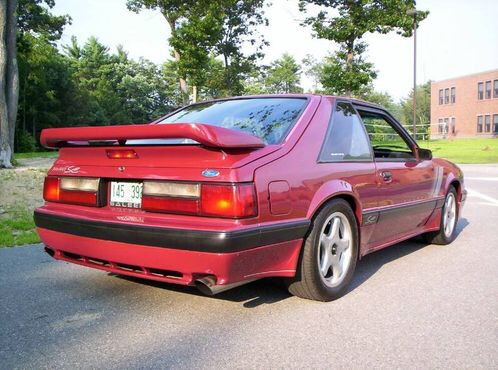 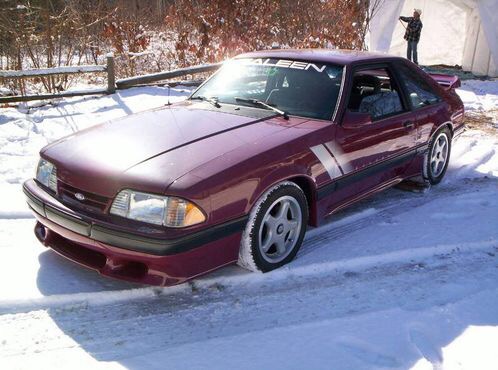 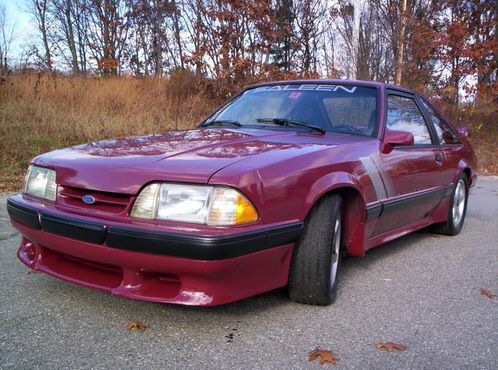 As with any build sometimes things come along that push you to change direction.  Not too long after having it look like a Saleen SC, Jay had the opportunity to buy a complete 87-88 Saleen interior.  This got the wheels turning even further because his car is a 1988 model.  At that point a direction was decided upon and Jay sought to find all the OE pieces of an 87-88 Saleen or as close to those as possible.

Once the interior was in hand Jay took it to the next level with cloning and added Saleen OE mesh wheels, rear brakes and axles, and the 87/88 Saleen lower stripes which he applied to the car himself. Along with the correct shift knob, gauges and the Saleen specific suspension, this gave the car the complete look of a Saleen down to every detail which even included changing out the windshield banner to the correct “Saleen Mustang” logo which is correct for 84-88 Saleen’s.  (Small trivia for Saleen new comers. The “triangle A” logo started being used in 1989.) 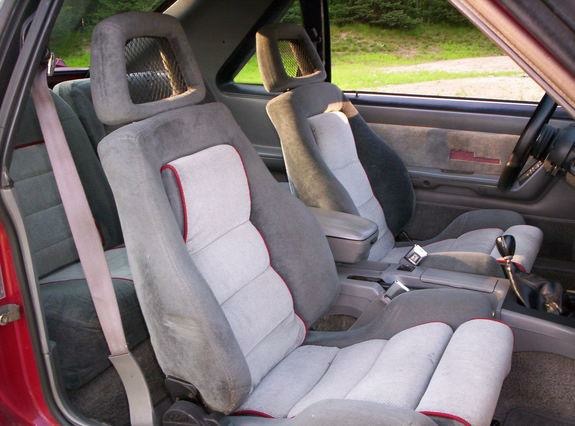 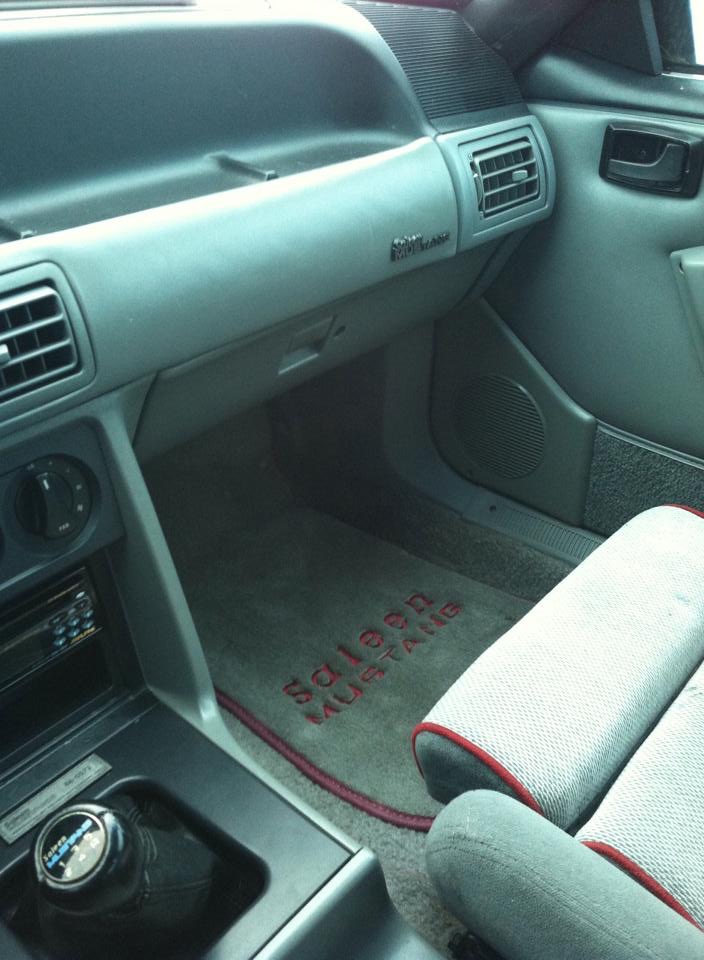 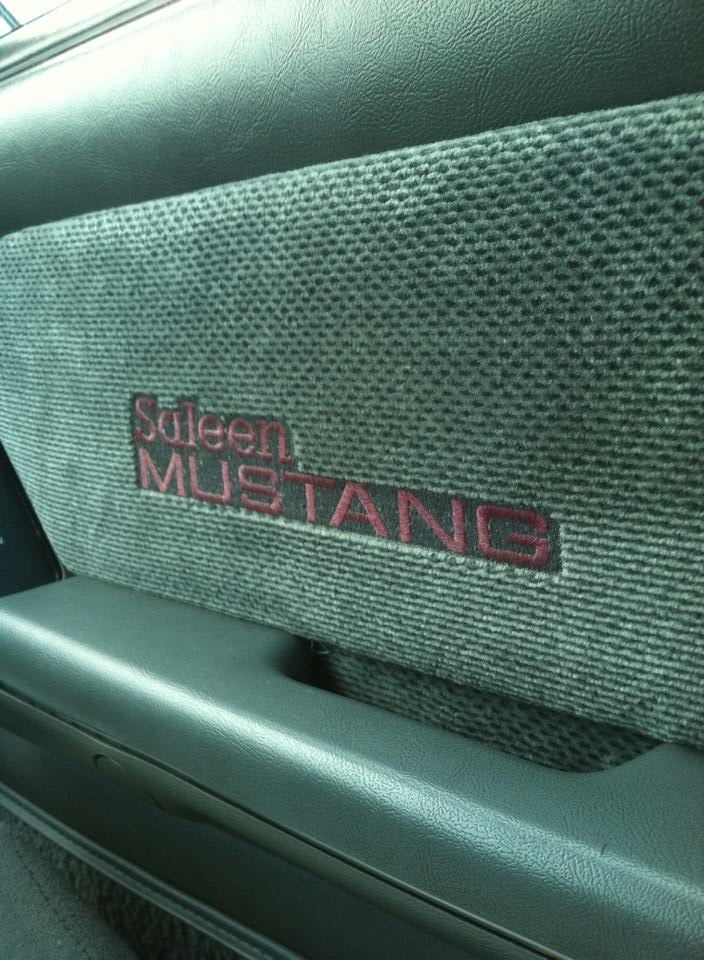 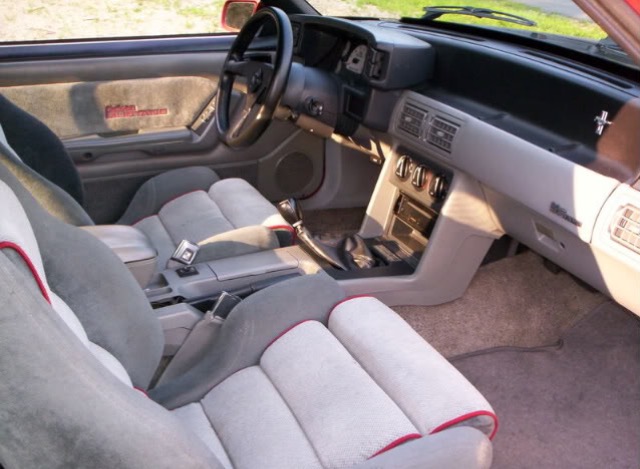 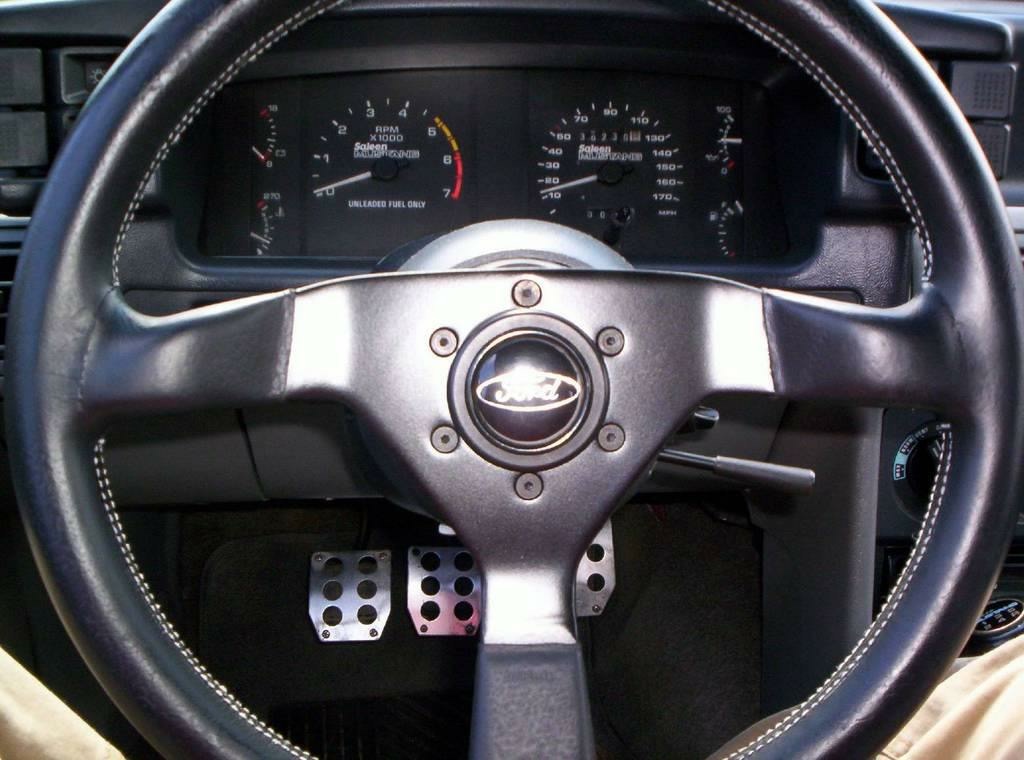 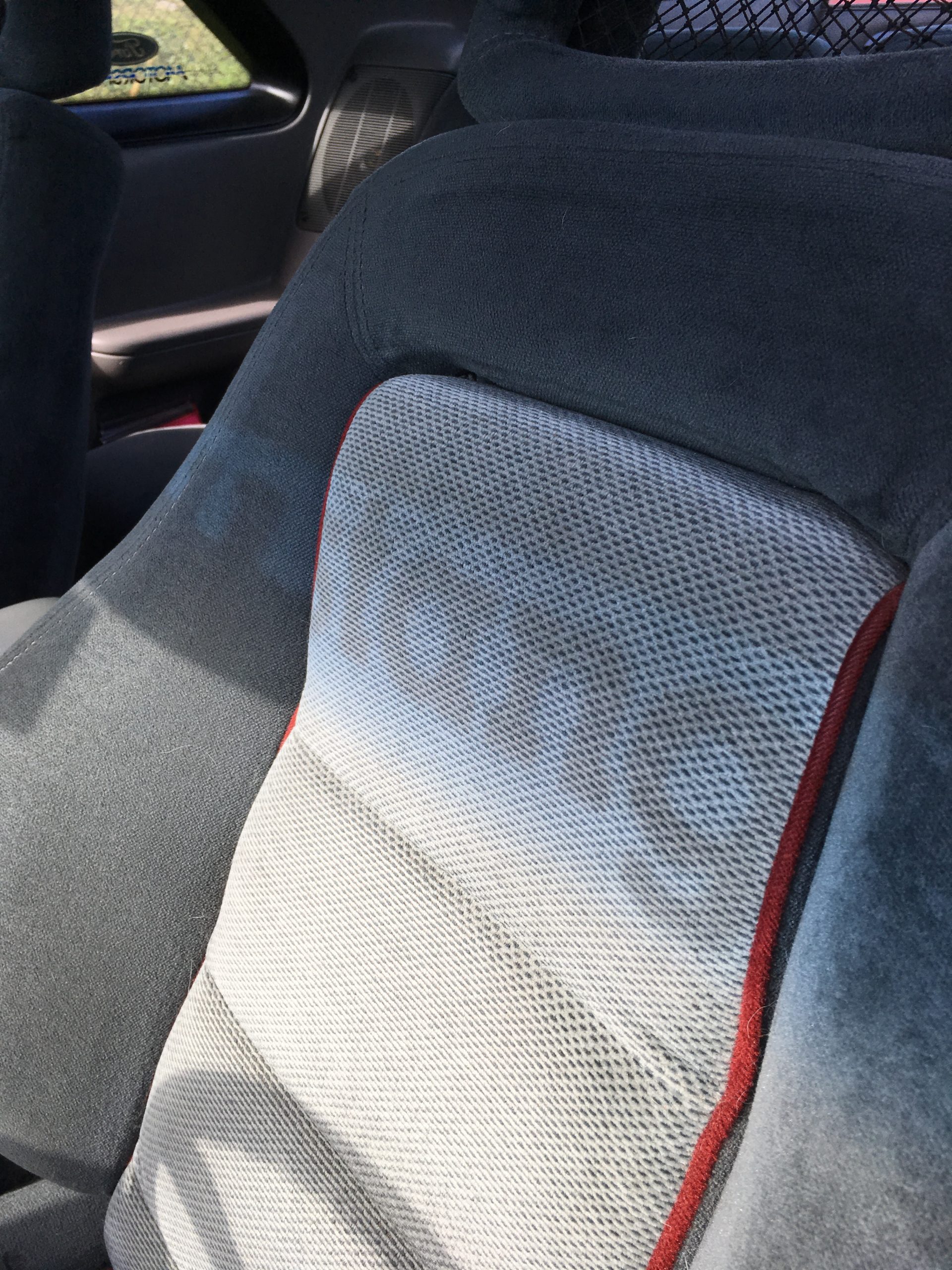 Crowning off this achievement is a complete 87-88 Saleen Flofit interior, gauges and shift knob.  The only parts on the car that are not Saleen OE is the strut tower brace and the radio.  Jay was even able to score a set of Saleen badges from a totaled Saleen to complete the look.  He didn’t want those to get into the hands of someone who would make a clone and then try to sell/represent a car that isn’t a real Saleen.

Jay is keeping his eye out for a few pieces to make it completely identical with the front air dam. Those Saleen enthusiasts with eagle eyes may note the minor differences. Yet there are plenty of real Fox Saleen’s with later ground effects due to either injury or owners personal preference.  Also Jay has the correct 87-89 Saleen strut brace to install later. That will round it all out under the hood. That part in of itself is very very difficult to find. 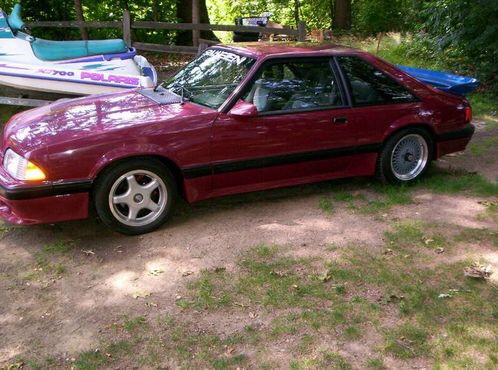 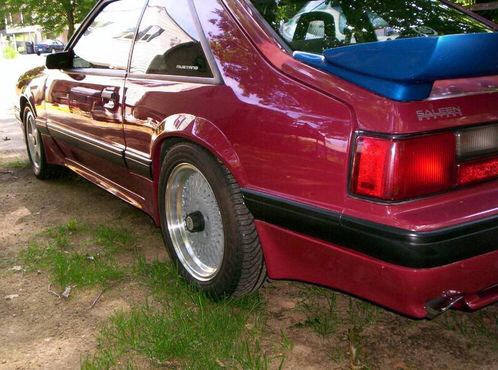 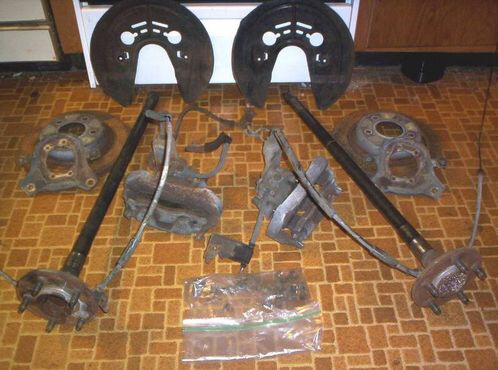 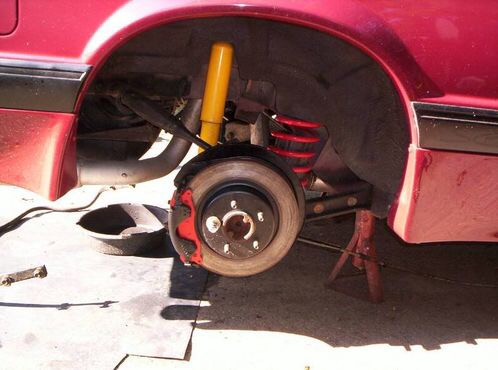 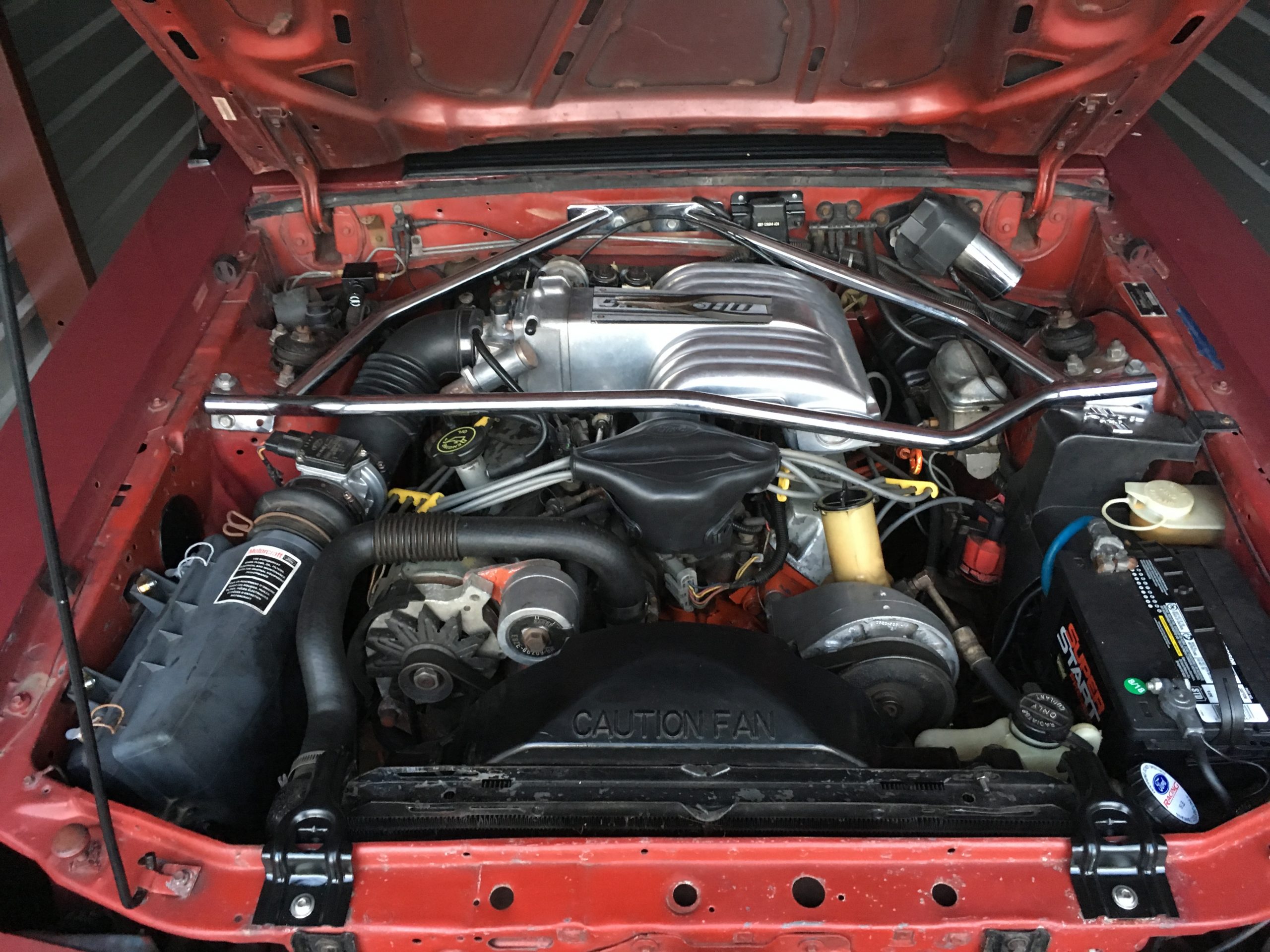 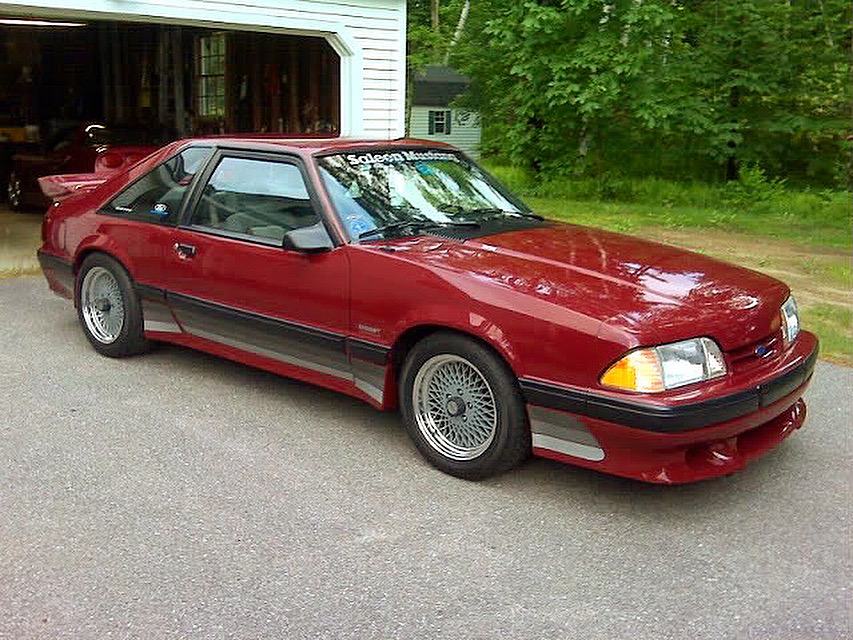 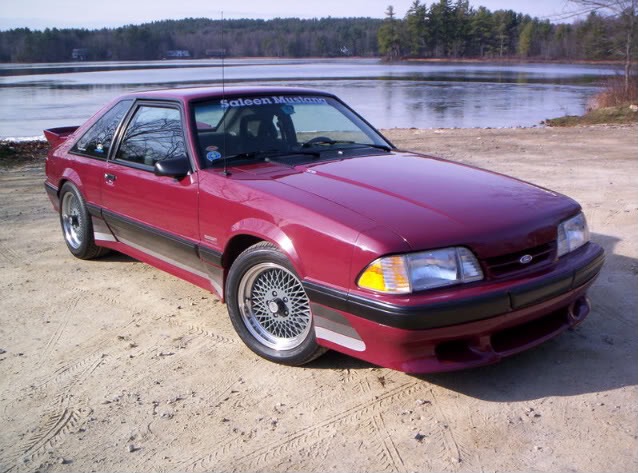 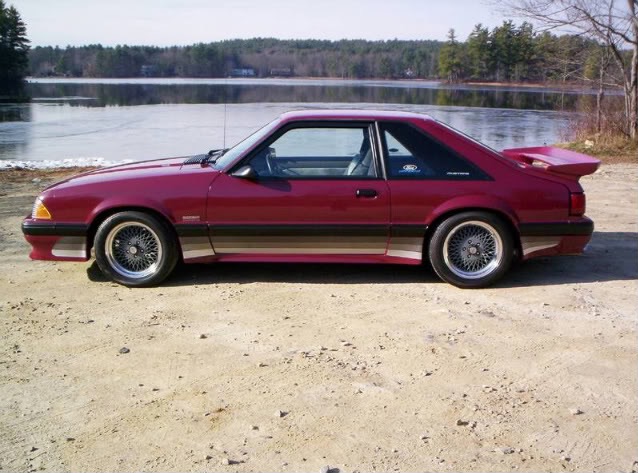 Jay has taken what would be a simple four cylinder/auto grocery getter and turned it into a streamline butterfly with looks to kill.  The accuracy and attention to detail is one that is not just a tribute.  This one is made to be “genetically identical” to a real Fox Saleen.