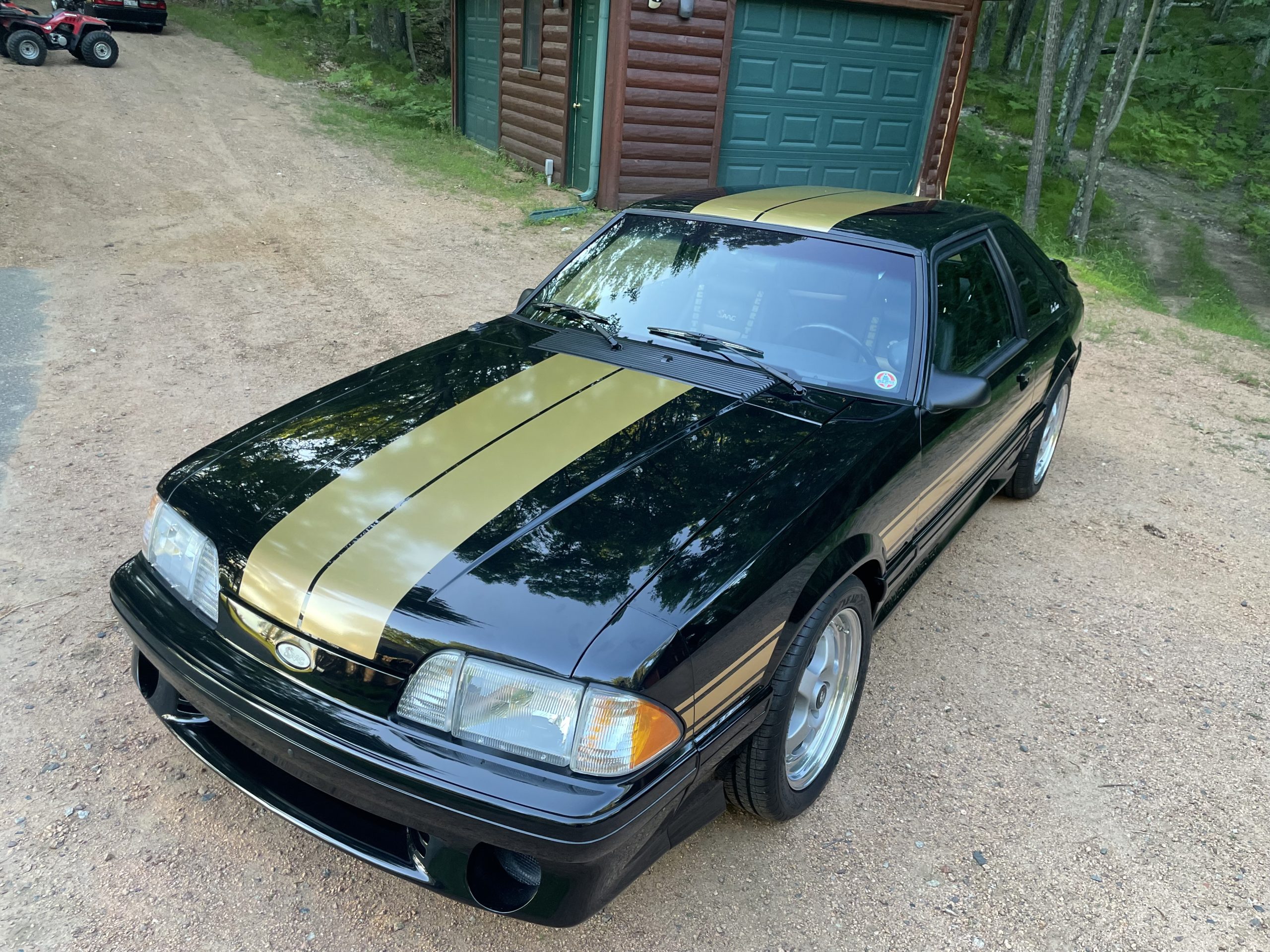 Here at Purist Motorsports we’re all about the rare and unique cars that are often overlooked or even unknown by the masses. There are so many models that production manufacturers allow other manufacturers to improve upon. For instance, AMG was one to improve the Mercedes (before AMG was purchased by Mercedes themselves), RUF is one that is associated with the Porsche 911,  and of course Shelby American is associated with the Mustang.

In the 1980’s and 1990’s there were several newcomers to that world of improving on a particular model.  Obviously Saleen was one that made a pretty big splash, Kenny Brown was another that started improving cars in the late 80’s and early 90’s, Steeda was another to join the long list of people improving upon the Mustang Foxbody platform. Due to the popularity of that model there were many who offered models of the Fox Mustang to those who wanted and could afford a better performing car at initial purchase. 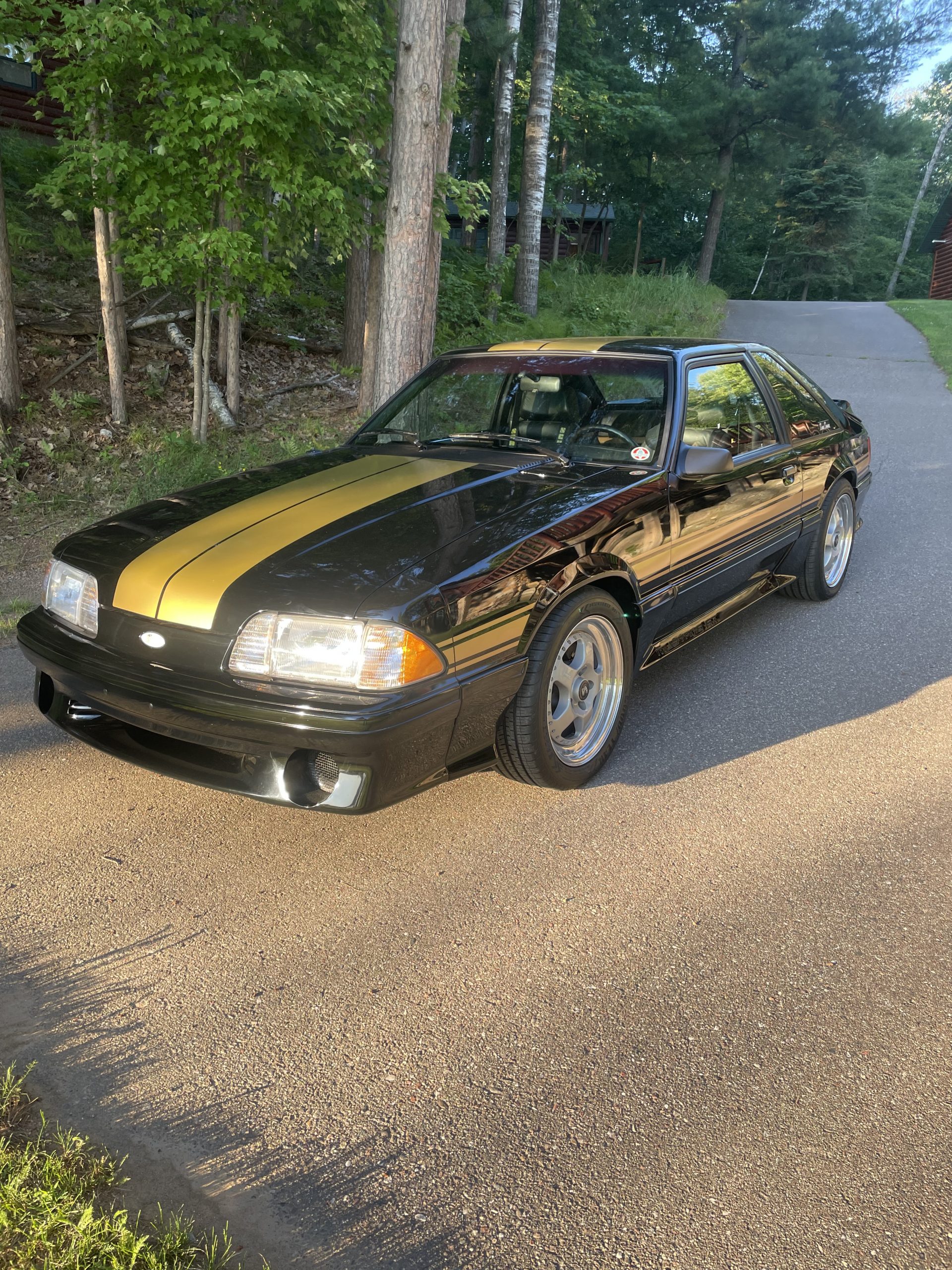 Enter in the Shelby American Automotive Club to the scene.  In the early 90’s this club was one of, if not the only one, allowed to use the Shelby name.  At the time Shelby was putting his mark on the Dodge and Chrysler products thanks to his long time friend and godfather of the Mustang, Lee Iacocca who worked for Chrysler at the time.

So the Shelby American Automotive Club had a couple of guys who were interested in getting a modern version that would outperform the first generation Shelby Mustang. The SAAC Mustangs, as we know them today, began with the push of two leaders in the Shelby American Automotive Club.  SAAC members Ken Eber and Rick Copec with the help of fellow member David Wagner, were on their way to create another icon. It just so happened that David was head of the Ford Power Products Operations Group. Who wouldn’t want an ‘in’ with the main manufacturer of the car and parts?

When you group three gear heads together it isn’t that hard to come up with a formula to create more power and better handling out of a car. Especially when one of the three works for the “Power Products” group of the manufacturer. It’s easy to do one car but the challenge is doing it to a run of cars and getting approval to create a model and build them.

Initially these cars were planned to have the Shelby name on them.  It is rumored that Shelby himself didn’t mind but the lawyers at Daimler/Chrysler were like “nope, that’s ours to use right now”.  So unfortunately the cars didn’t have the rights to use the Shelby name plate. Although a few cars were initially built with the Shelby nameplate, they had to be removed. So the cars would adorn the SAAC name and logo on them. 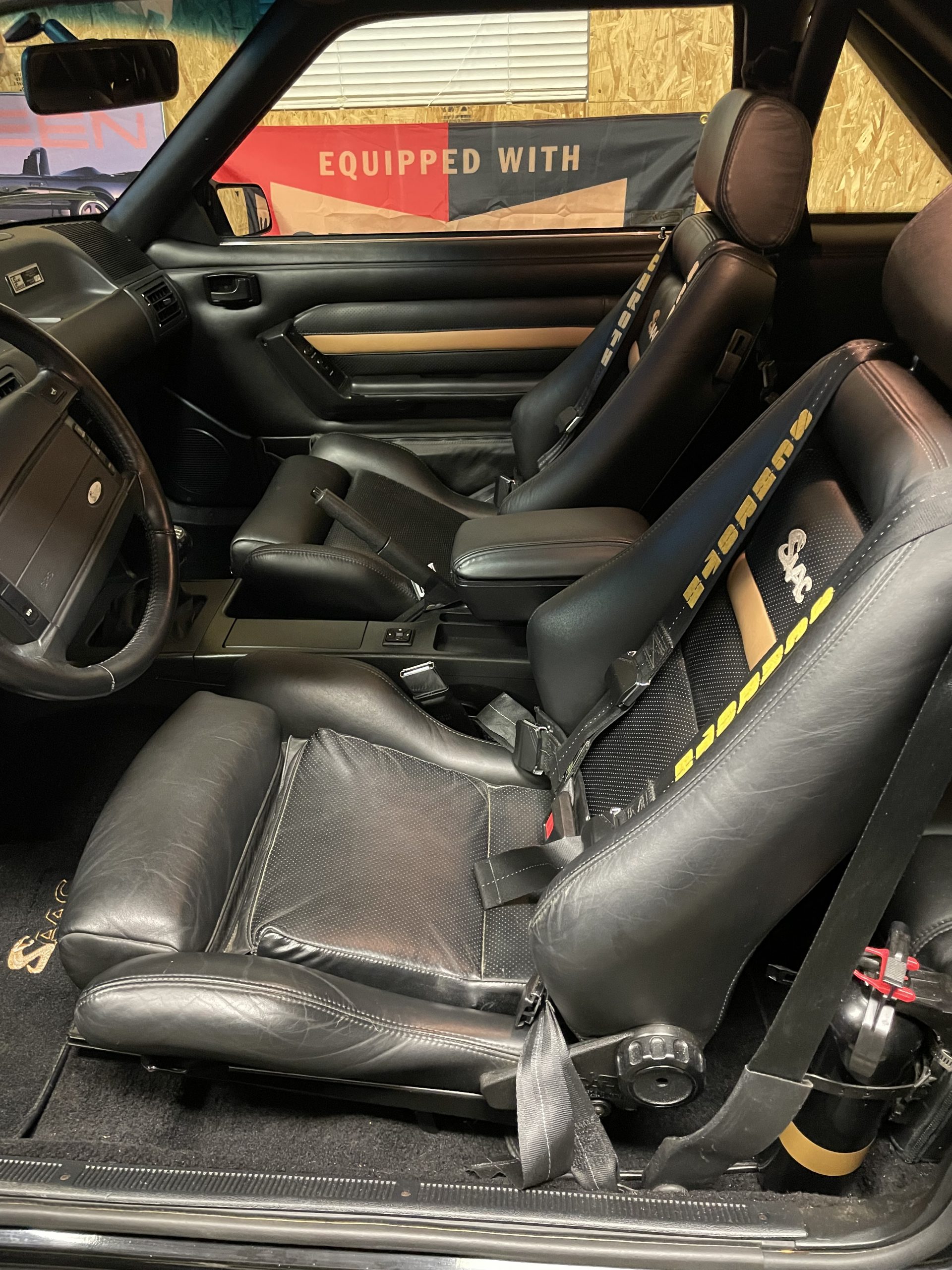 As with anything entrepreneurial you have high hopes and expectations to “set the world on fire” with your products.  That being said they had plans to build 250 units the first year of production.  Sadly, only 62 other people felt the same excitement the first year of production. With a price tag of $40,000 that may have been what challenged those sales.  At the time that exceeded the base model Corvette pricing. Consider the Mustang GT sold in the mid to high teens at the time depending on options.  So the SAAC Mustang was double in price.

That price included a modified motor with GT40 heads, GT40 tubular intake, 65mm Throttle body, 67mm EGR, 1 5/8″ shorty headers and a Borla cat back exhaust.  The suspension was upgraded with all wheel disc brakes, brake ducts that went in place of the GT fog lamps. 3 piece Simmons wheels, lowering springs, and Koni adjustable shocks to dampen the lowered stance. The drivetrain also included the obligatory Hurst shifter and a 3.27 final drive ratio in the 8.8 axle.

It is worth noting that the only rear gear option available for 5 speed Mustangs was 3.08. So the 3.27 gear in a 5 speed equipped car was very special at the time.

The first 37 cars are MkI cars.  All of those cars were white with blue stripes. The Mk2 cars were available in black, white, or red and were also available in a convertible.

Buyers who had to be more budget minded were able to get in on the action through the SAAC Snake models.  These were cars that didn’t come standard with all the options of the MkI and MkII cars.  These cars didn’t come standard with the engine and interior mods.  But received all the exterior, suspension, and brake modifications. Out of a total of 67 cars produced, only 11 of the cars are SAAC Snake models. 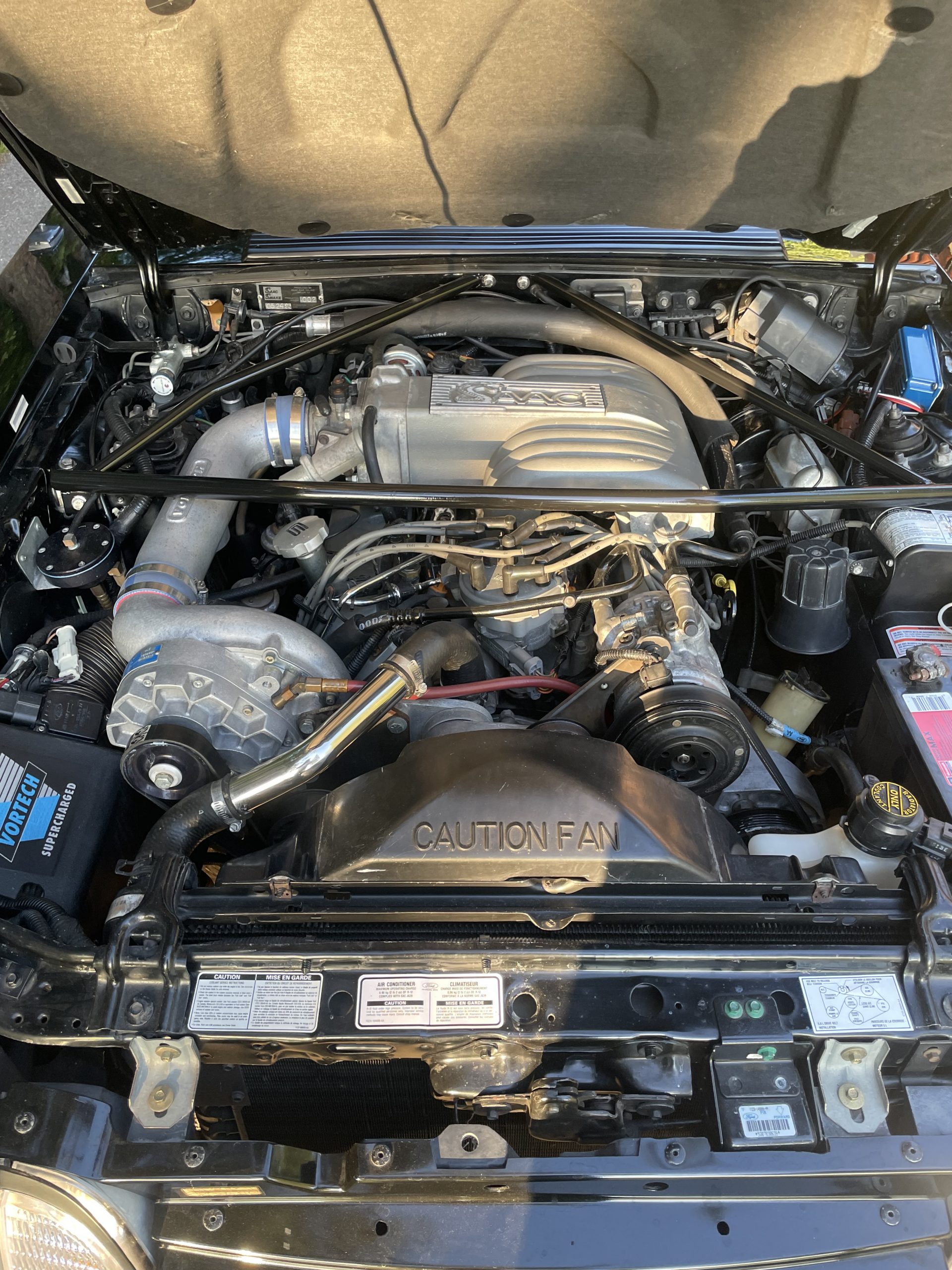 It is interesting to note that these cars haven’t reached the knowledge of the Mustang masses of enthusiasts.  They are still an underground model in that most Mustang enthusiasts are unaware of what they are and what was done. However, those that know what they are chase these things and track their location like a hound dog stuck on an animals scent.

Scott Warren is one of those enthusiasts of the SAAC vehicles. Many years ago he was able to acquire SAAC MkII #01 which is the last vehicle produced by the Shelby American Car Company and is a convertible. SAAC MkII #01 having a unique story being numbered #01 and the last one built attracted Scott’s attention, that and the vehicle is adorned in his favorite shade of Black with gold stripes.

Once Scott’s SAAC MkII arrived in his garage that led to curiosity on what other black and gold cars were produced. In his extensive research it came to light that there were two SAAC Snake hatchbacks produced in the same color combo as his convertible. Once armed with that information the hunt was on to find out where those cars were located. 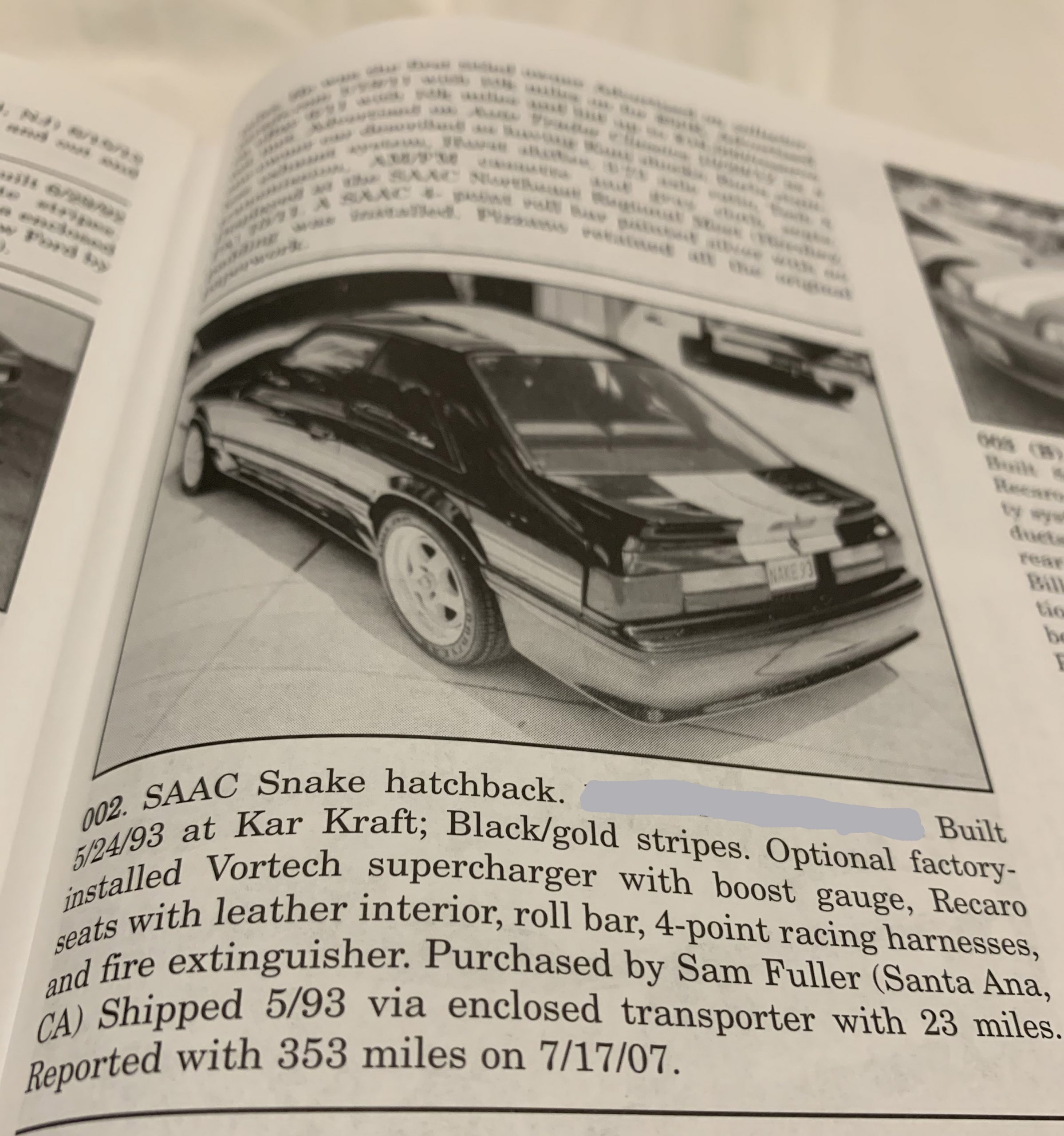 Scott was able to work with the SAAC registry and get information regarding those two hatchback Snakes that adorned the Black and gold scheme.  The first one Scott could locate was SAAC Snake #08. What made this one easy is that it was in a Mustang Monthly article in 2001 titled “Black Mamba”.  SAAC Snake #08 did garner some interest from Scott but when he found out what options SAAC Snake #02 came with he HAD to find #02.

SAAC Snake #02 had just about every option checked off.  It is equipped with a four point roll bar with Scroth Racing seatbelt harness’, 1 of 9 with SAAC Recaro leather interior and a color matching fire extinguisher that is still with the car to this day. While the motor didn’t receive the GT40 modifications of the MkI and MkII cars this car did get the optional Vortech Supercharger.  Only three other SAAC Mustangs received this option. It makes this a One of Four “factory supercharged” SAAC Snake’s. So as you can see this is one rare bird and Scott was on the hunt for this prey in a bad way. 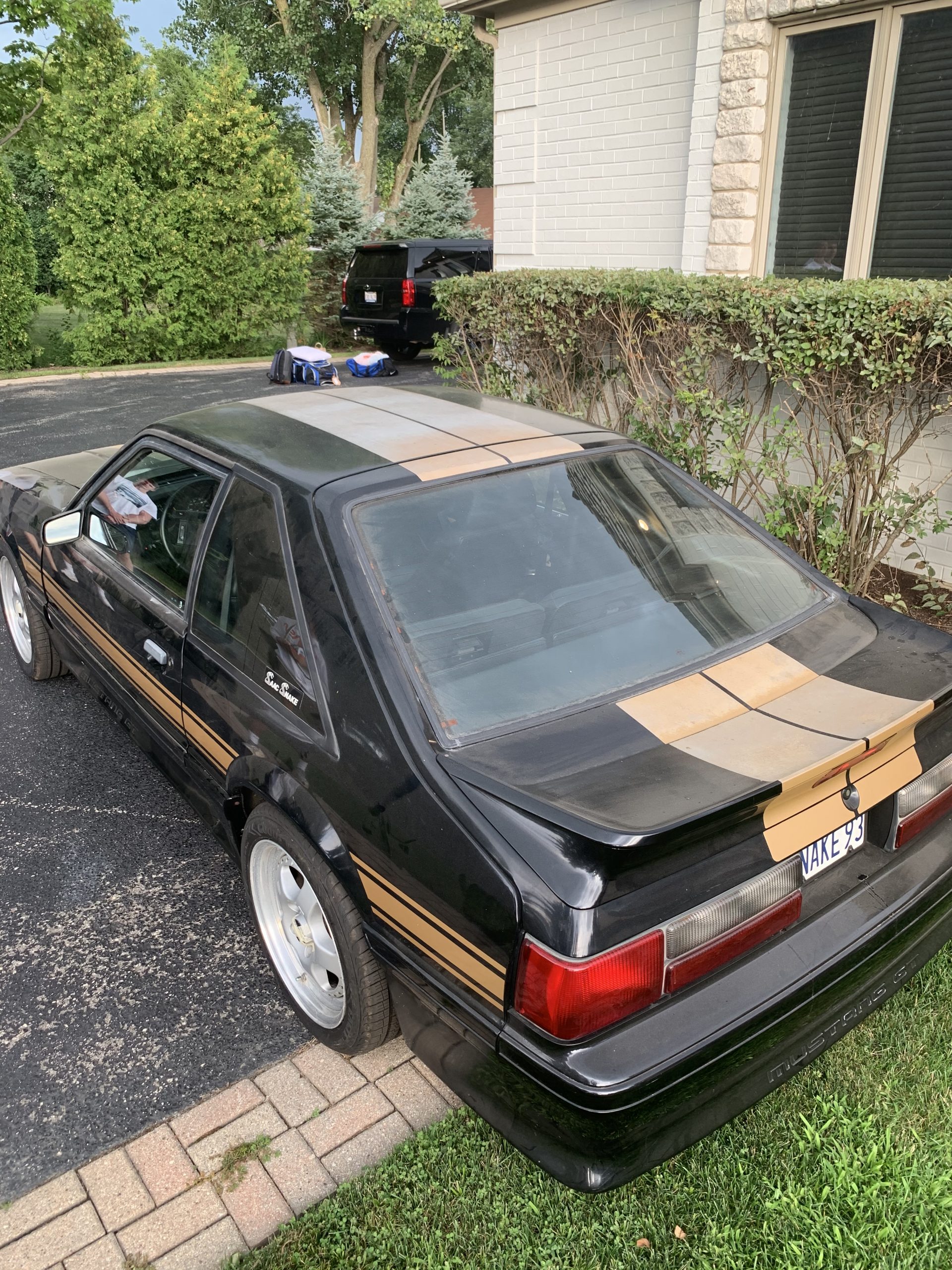 Again, working with the SAAC Registry, Scott was able to get that detailed information and he was able to get the last known registration to the SAAC Registry. Keep in mind that we are now beyond 2010 in the timeline and the last registration with SAAC was in 2007.  BUT, the car had shown only 350 miles at that time. Scott did try to reach out to the owner of the car based on the registry information but didn’t receive any response.

Having been through this exact scenario with our Almost 4 Project we can relate to the emotional rollercoaster of high’s and lows like this.

Many years went by and a few more attempts of contact were made with no response from the owner. At this point Scott was beginning to think this was all a dead end and was moving on and satisfying his taste for unique Mustangs through the Saleen models. 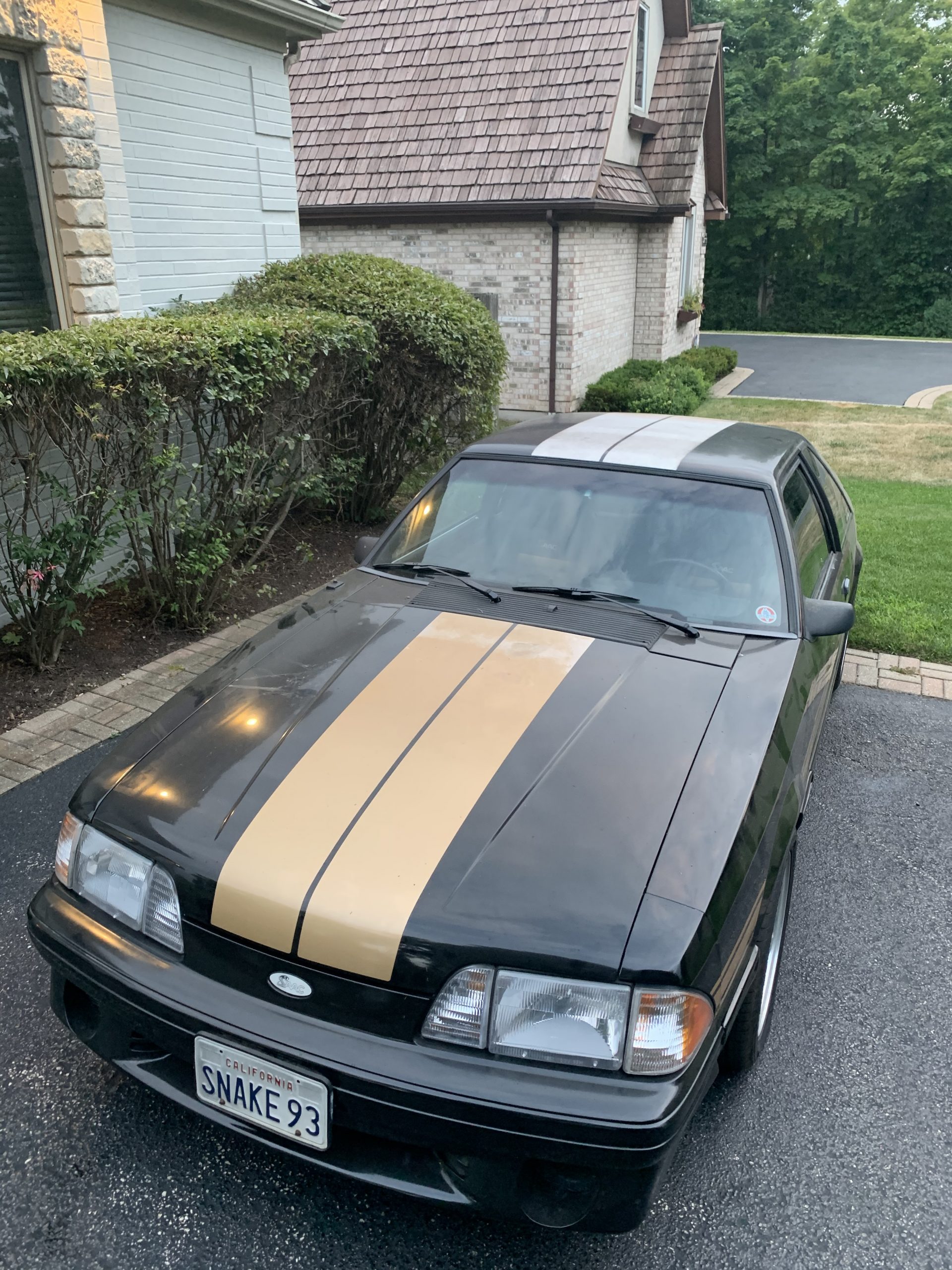 Things changed in an instant with a text. A glimmer of hope was shining on Scott’s face looking at his phone of a screen shot of a Craigslist ad. Scott immediately jumped on Craigslist using the ad number to find it only to find that the ad had been deleted.

As soon as that high was initiated, the low began to sink in again.  He was so close!!

It bothered him so much that he turned to the SAAC Mustang Registry Facebook page and had to reach out to the people who had helped him get this far. His hopes were to find out if the admin of the group or anyone had knowledge of the ad.

In reaching out to the Admin of the page Scott had learned the admin was the one talking with the owner of SAAC Snake #02. The ad was removed because he had asked the owner for some time to gather up the funds. Scott was bummed a little but asked the Admin if he could be second in line should it not work out. Absolutely! the admin confirmed. 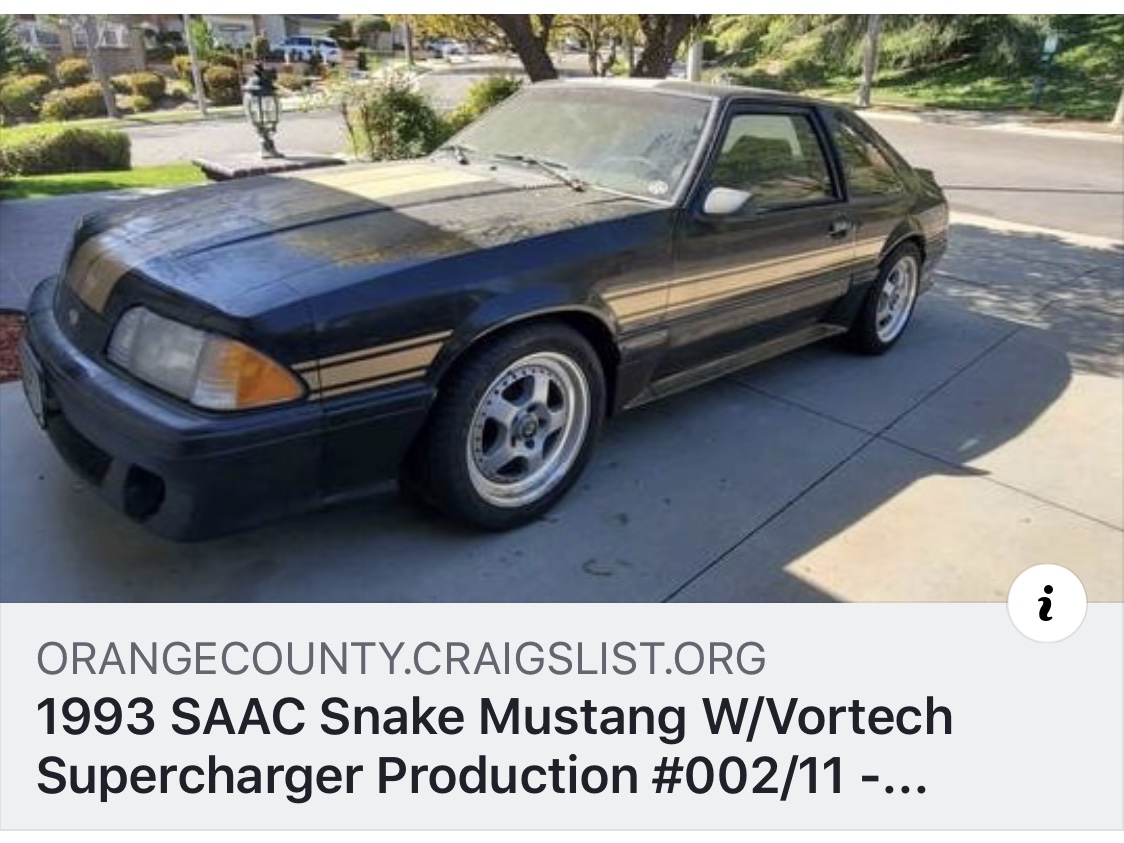 Within a week that Admin reached back out to Scott to inform him that he was not able to come to terms with the owner for a deal.  Scott was advised the car was all his for the taking.

Not wasting ANY time, Scott immediately reached out to the owner.  Due to the circumstances at hand the car needed to be removed rather swiftly and thanks to a friend local to the car it was easily secured and stored prior to shipping. 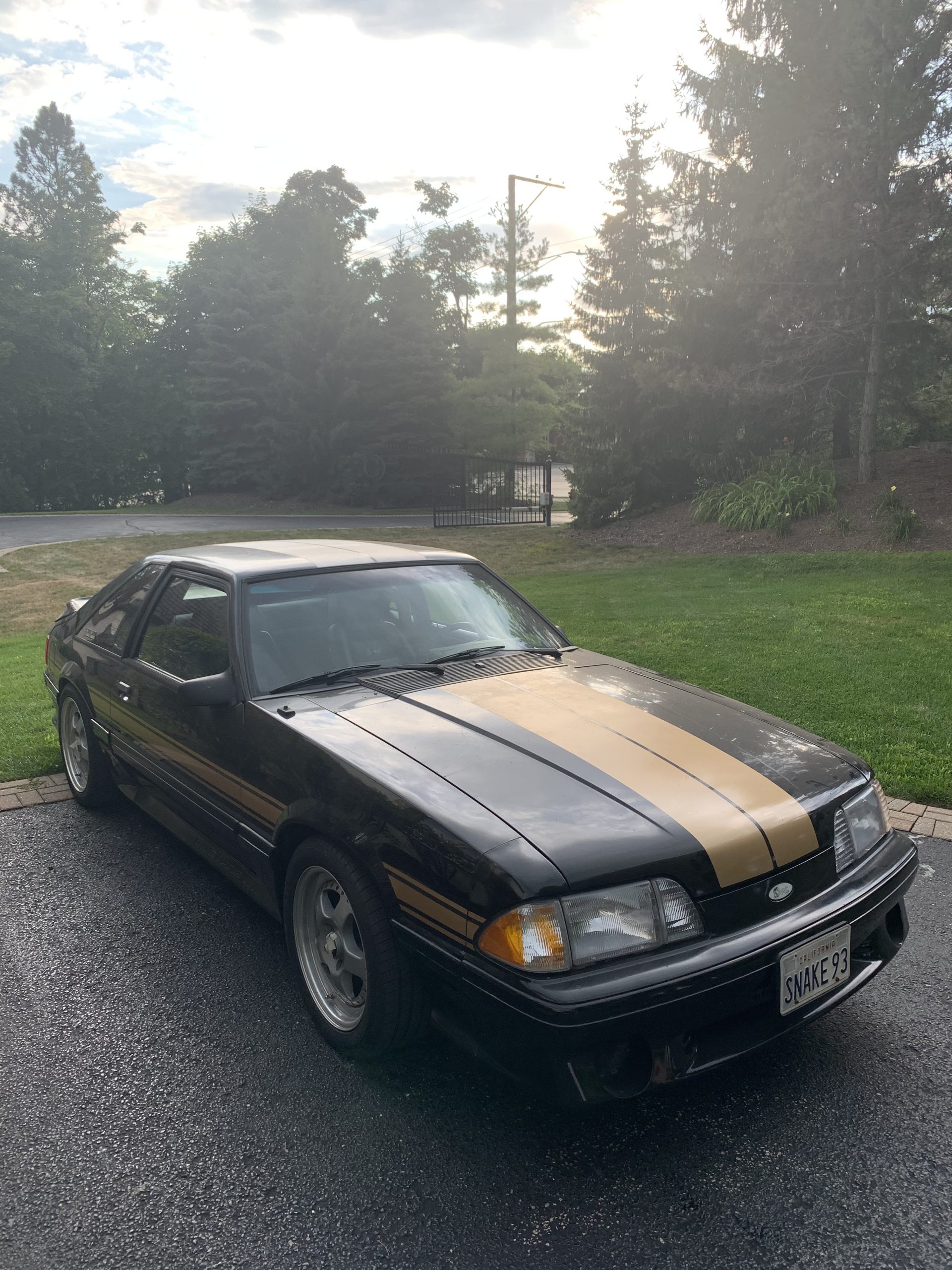 Sadly the owner of the car was suffering from dementia. It seems that would all add up to not responding to Scott reaching out in the past.  Due to the owner suffering from that disease the car ended up sitting outside for right at a decade. But, with a few fluid changes the car started right up and drove to it’s temporary storage facility in Scott’s friends garage.

The car ran and drove, but the exterior was very baked from the sun.  Thankfully the owner put the SAAC cover on the car, something every SAAC came with embossed with its production number.  This helped protect the interior from the sun but in that process the cover was sacrificed as it fell apart when it was pulled off the car. 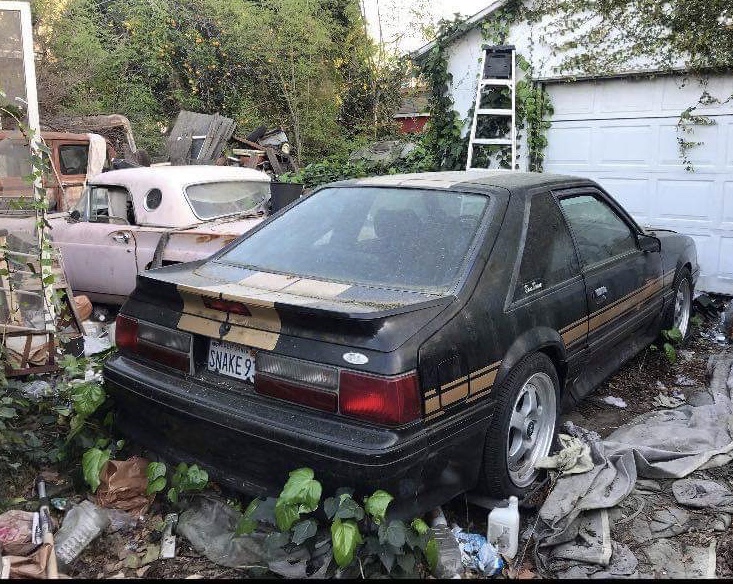 All in all the car was complete with all the documentation.  It just needed an exterior refurbishing and a good detailing in the engine bay and underneath.  There was no rust to be found anywhere.

Once the car graced Scott’s garage he initiated the help of a dear friend who owns a shop and restores/builds cars. With countless hours of removing decals and carefully buffing the paint the gloss came back with amazing results.  What you see in these pics is an all original paint which only needed “correction” to get it back to this luster. With new stripes and decals this car was brought back to what we’d consider better than new condition.

Congrats Scott! We’re excited that you found and now own a piece of SAAC Snake history. Kudos to you in giving it the care it deserves. We doubt this car will ever sit outside again in its lifetime. 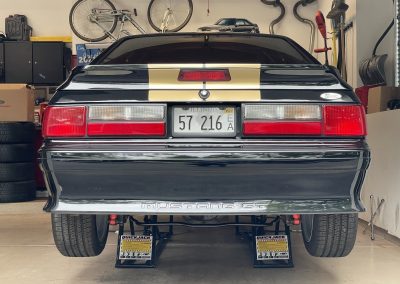 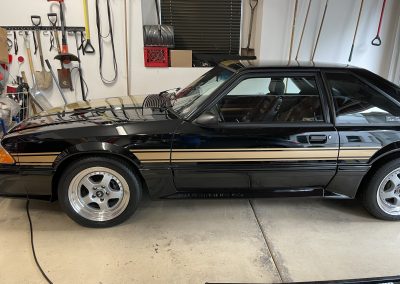 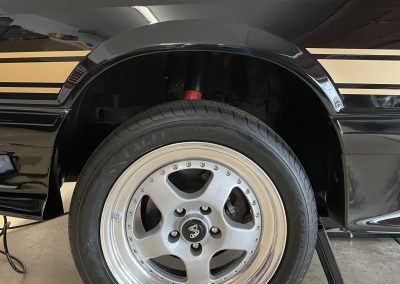 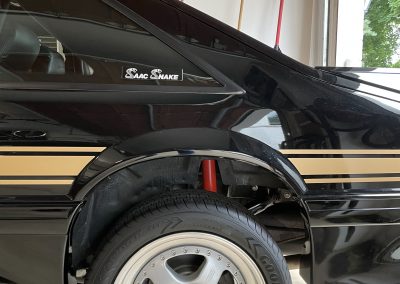 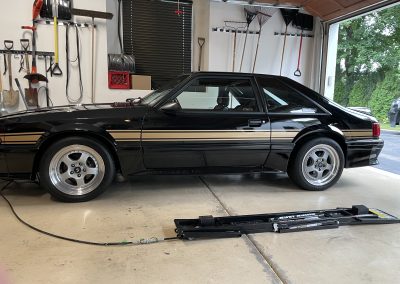 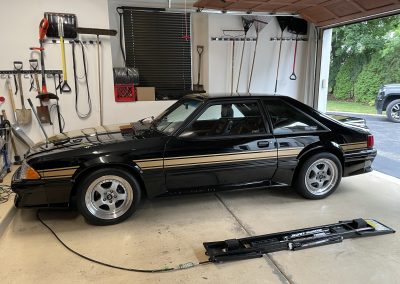 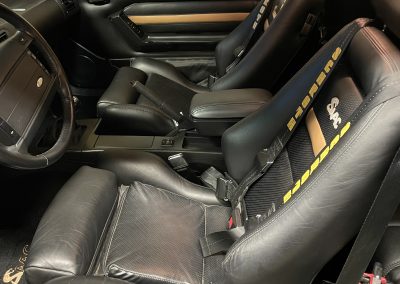 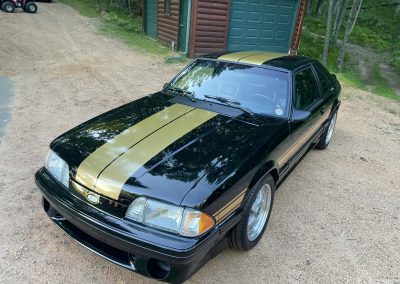 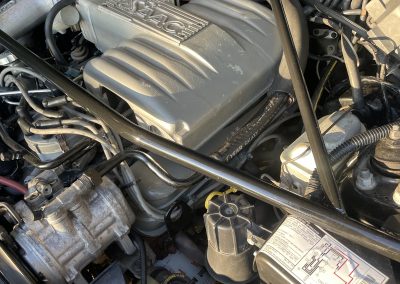 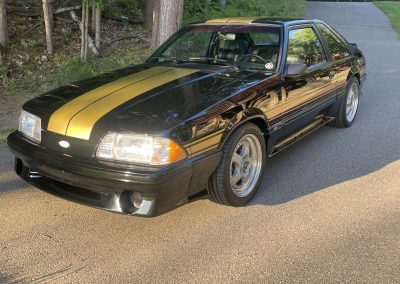 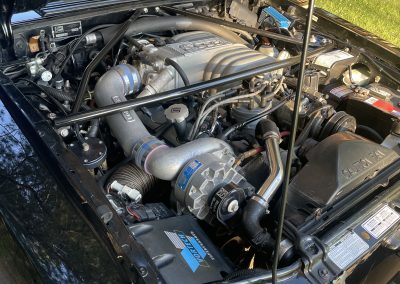 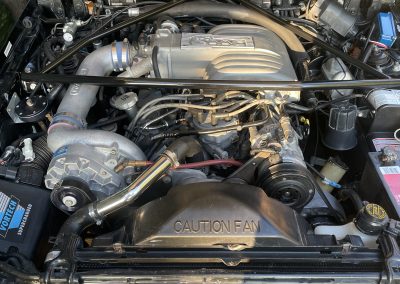 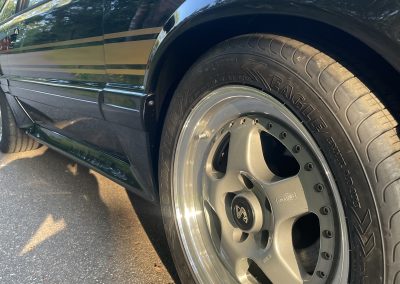 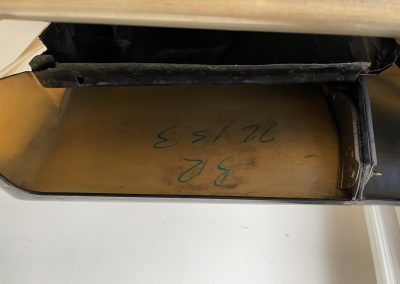 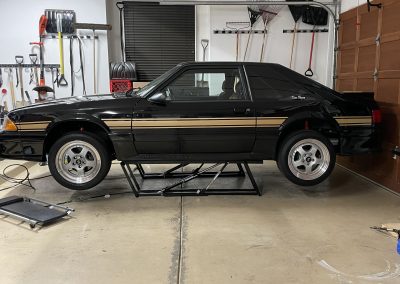 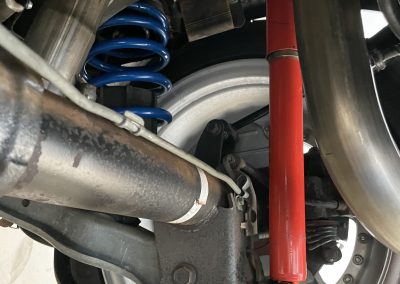 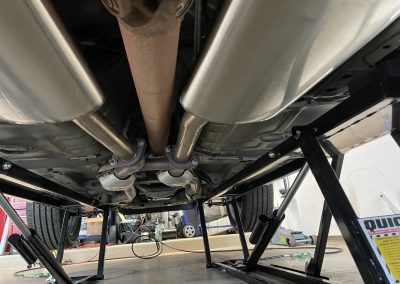 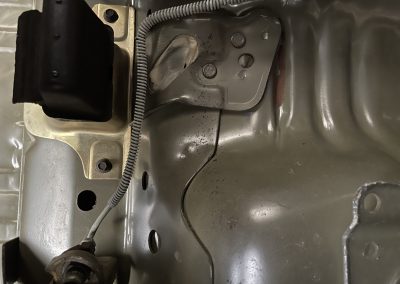 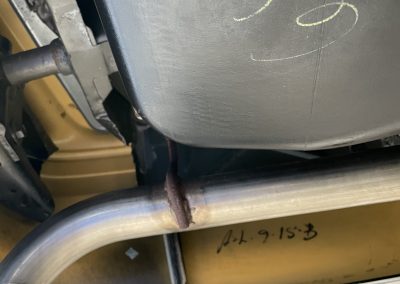